An unofficial guide to the popular parlour game Mornington Crescent 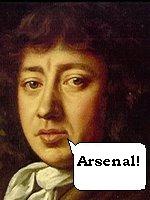 Mornington Crescent, due to become an Olympic sport in 2012, was devised and first played by the famous diarist Samuel Pepys and his good friend Sir Isaac Newton, using an Underground map gleaned from the back page of his Lett's 1668 Desk Diary.

This, although puzzling to the layman, is despite the fact that the London Underground did not come into use until two hundred years later, but circumstance and the vast rebuilding of London following the Great Fire showed that this would prove no obstacle.

December 14th 1668: "Up betimes, and in this greate chille, and tiring of the lowe quality of slatterne at this tyme of year, did sit by a grande fyre in myne rooms steadily beatynge myne good friend Newton at Mornington Crescent. He damn'd myne eyes, for he cannot master the Hammersmith Clockwise Loop, and is forever finding himself in knip"

Historians have been puzzled by this anachronism, but they should not be. Such is the layout of London's streets, the seventeenth century player was able to play the game very much as it is now, simply by logically joining points together on any reasonably accurate map of the London capital. In fact, Mornington Crescent game maps of the period bear a striking resemblance to the Tube map famously designed by Harry Beck.

Inspired by Pepys' writings on the subject, Prince Albert strove to make the pastime popular once again in the nineteenth century; and it was the game's cult following in the gentlemans' clubs of the capital that eventually resulted in the raising of the capital for the Metropolitan Line, and the founding of the London Underground as we see it today.

This has led, of course, to a chicken-and-egg question regarding Mornington Crescent. The answer is simple. The London Underground is simply evolving to fit the standard game map as laid out by Pepys and Newton in 1668. While the whole map is valid, players know (and formalised by the 1902 "Callinthrope" Law) that it is bad form to call stations that are not currently open, or have not even been built yet.

This has not always been the case. Incredibly, historical players often refered to Arsenal Station by its correct name, even before its 1932 renaming, and Pepys himself is known to have brought Heathrow Terminal Four into play in even the earliest of games.

As of now, however, most players are loathe to use stations on the Docklands Light Railway, with rules dating back as far as 1723 stating that "Anye statione from Bank to Beckton to foulest Lewisham brings M.Crescent in one."

Queen Victoria, a prolific diarist herself, made the following note in her journal regarding the rise of the game under her reign:

August 21st 1857: "Most vexed by my darling Prince's behaviour this evening. He returned from the Athenaeum in the foulest of moods, having been roundly defeated by Darwin at his confounded parlour game. Albert near split me arse-to-tit shouting the words "Hammersmith Clockwise Loop!" as he hammered away. I have called on my Prime Minister, the Earl of Derby, to take measures against this iniquitous pastime, but, alas, he cannot."

Other countries have also laid claim to the devising of Mornington Crescent. For example, our unwashed cousins in France assert that their parlour game Chateau d'Eau is a direct ancestor of the British version, yet it lacks the style and panache of Mornington Crescent; and the illogical layout of the Paris Metro does not lend itself to sufficiently balanced game-play. Purists also point out that there is, in fact, no Mornington Crescent in Paris, making any translation of the game nigh on impossible.

The game was popularised in the 1970s by the Radio 4 panel show "I'm Sorry, I Haven't A Clue", which has effectively set down hard-and-fast rules for the game for the first time with the publication of The Rules of Mornington Crescent, which, despite high demand, is sadly out of print. Even the British Library's last remaining copy has mysteriously disappeared, possibly into the hands of highly competitive foreign Mornington Crescent federations.

The sport of Mornington Crescent is not without its controversy, with the following extract from Hansard recently finding its way into the public domain:

William van Straubenzee (Wokingham) (Con): To ask the Prime Minister if he has ever taken part in, or gambled money on, Mornington Crescent parties which may have been attended by the ambassadors of Bulgaria and the Soviet Union.

The Prime Minister (Harold Wilson) (Lab): I have no comment to make on what is a private matter. I do not even know what the Hammersmith Clockwise Loop is, a practice I gather the honourable member is a past master, much to his party's shame.

Despite its murky past, Mornington Crescent is as popular as it has ever been. A multi-million pound deal with Sky Sports is likely to bring the game to a far wider audience, riding on the wave of World Federation of Stare-Out where the England team has just returned triumphantly with The Ashes, and a book deal

will, at last, bring the complex rules to the masses.

There is only one last thing: I'll start - Parson's Green. The Hammersmith Clockwise Loop is permitted.
Posted by Alistair Coleman at Monday, May 15, 2006