Does exactly what it says in the title. Take a film, knock a couple of hours out of it. And if you can kill off the dreadful sequels, so much the better.

INT: THE BRIDGE OF THE SS POSEIDON

Captain: Yarr! Tis a high sea an' no mistake!

First Mate: Aye, Cap'n must be sore dreadful for the passengers in the ship's ballroom.

Captain: Yarr! It must be the first New Year's Party where people were spillin' their guts before it started!

Mate: Yaarrrrrrrggghhhhh! A huge wave, about to hit us broadside! It'll surely capsize us, Cap'n!

Captain: Steer the ship into the wave then, me heartie!

Minutes later, the wave has passed, deluging the ship in water, but little else.

Captain: Yarrr! That was a close one. And not a hand lost!

Mate: Except Ernest Borgnine. I shot the ugly bastard with the flare gun.

Spock: Ah, there you are captain. We were looking everywhere for you. 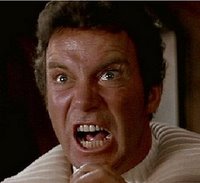 Uhura: You bastard, James, you never clean my teeth anymore. That's the last time I do the fan dance in your quarters. Video camera or no video camera.

Bones: And it's the only decent movie he's ever directed.

Spock: Whatever the logic behind your lack of trousers, Captain, I'm afraid we had no choice but to start the meeting without you.


Now: Your turn. Hint - Eddie Murphy has signed on for Beverly Hills Cop IV. Stop this blasphemy. Kill it! Kill it now!
Posted by Alistair Coleman at Tuesday, May 02, 2006