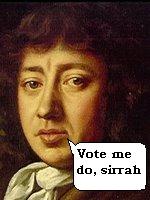 4th May 1666 Up betimes and to myne offices where I met the fouleste gentle-man, who introduced himself as Mr Scarye Duck , enquiring as to the location of ye privy so he could "done a poo". Alas, I told him we had none, so he did shitte out ye window in ye traditional manner, and he was best pleas'd. After lunching out on fresh slattern, he didst entreat me to list his stories for the Thuresday Vote-o, some sorte of foul act of "democracy" for which he shoulde be flogg'd. Then, home to bed, where Mrs Pepys, gamely allow'd me to pass myne waters over her cleavage.

* Bad Dog III - The Kitchen Massacre: Alas, Mrs Pepys has fallen ill with a dreadfulle chill. I am indebted to Mrs Cooper, our chef, who has risk'd her own good health by spending the laste three days in myne wyfe's bed, where they may share bodily warmth.

* The Joust: Her moanes as this illness wracks her pert body are sickenynge to hear, yet, once agayne, she bears it well, and such is the fearfulle racket from behinde her lock'd door, I fear the plague has spread to Mrs Cooper as well.

* First Aid: Starvynge for my gravy, Mrs Cooper has return'd to the kitchen to cook a fine meal for myself and my good friend Newton. My wife has not been forgott'n. Our footman and butler have kindly resolved to warm her body, and I hear them say she will be giv'n "a proper roasting". Tis pleasing to hear her appetite has return'd.

* Food Fight: After our fine repast, Newton and I didst step out to visit the tavernes around Shoreditch. Alas, we were set upon by some ne'er-do-well who demand'd our purses. Whilst I negotiat'd with the blackguard, Newton didst kick him inna fork and we claim'd a famous victory in this exchange.

* Inferno: Finding him without money - for we in turn demand'd compensation - we instead tied him in his owne britches, bugger'd him most roughly, and left him at the docks screaminge for God's mercy, which, for him is in short supply. Home to bedde, where Mrs Pepys fearfulle groans from the next room fill'd the night. Being unable to pull on myne nyghte out, I was forc'd to pull myself.
Posted by Alistair Coleman at Thursday, May 04, 2006