Today: The Eternal Dilemma. The Brown Trout of Doubt, as it were.

Do I done a poo first thing, as part of my shit-shower-shave routine, or wait until I get to work?

As I barely needed to done a poo first thing, I took the risk, knowing full well the hazards I would be facing.

Touching cloth, the downstairs bogs were closed for cleaning, meaning a trip to the second floor. Where all three stalls were occupied. Woe.

I went in the disabled, where they've got one of those really tall, thin bogs that really test your targetting.

The answer to the Eternal Dilemma, then: go first thing. It's worth the extra strain.

That's how I live my life. On the edge.


Not quite a celebrity vote-o 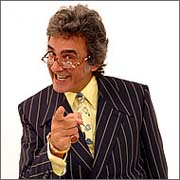 Greetingssss! It's David "The Duck Duke" Dickinson, your favourite orange-skinned former-jailbird niche television host here, hired by my good friend Mr S Duck because I'm As Cheap As Chips!. That's me - Cheap As Chips!. Which is what I am now that I'm not on the TV any more and my fifteen minutes is well and truly up.

Allow me to run my expert eye over this week's selection of Friday Scary Stories. Cheap as Chips!

The Joust: "A right old Bobby Dazzler. Genuine Queen Anne legs. I'd frot myself against this sort of craftsmanship and spunk my load all over it in any sale room. Eh?"

First Aid: "A bargain at the price, but look out for where the owner has clearly done a poo and tried to cover it up with cling film. A right Bobby Dazzler."

Food Fight: "A genuine reproduction fake antique MDF priceless right old Bobby Dazzler. See tthe workmanship on the handle? It's been up my arse, that has."

Inferno: "Look out for craftsmanship like this at antique fairs. A right old Bobby Dazzler, that's also Cheap As Chips!. I'd kill any dealer who had one of these for sale with my bare hands, and bury them in my garden, next to the tomato plants."
Posted by Alistair Coleman at Thursday, May 11, 2006