Mirth and Woe: The Kitchen Massacre 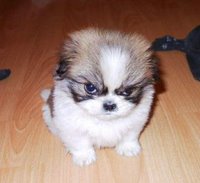 They left us at home to cope for ourselves, the fools.

With both parents down in the West Country, sorting out the paperwork on their new house, they thought that their offspring, aged between 16 to 19 would be mature enough not to trash the place, try to kill each other or hold a huge party.

God, we tried. We didn't have a party.

In fact, for the first couple of nights, we did absolutely nothing, utterly terrified of what mad act the other two will do. I actually barricaded myself into my own room by wheeling by 100W Bass Amp in front of the door and wedged it there with the desk, while every meal was minutely examined for traces of practical jokery. I was dealing with siblings who once dropped an entire meal for three onto a dog-haired dining room carpet, and still served it up, much to the disgust of the future Mrs Duck.

Anything could happen. Horrible things. At any time.

So, it was hardly surprising, come the Thursday evening, that a terrible row should break out in the kitchen between sister and brother. A trivial argument about cheese levels and the setting of the gas boiler was running terribly out of control, and it was only a matter of time before my brother would be beaten into a bloody pulp in the tradition Duck family stylee.

I was minding my own business in the living room at the time, cowering behind the sofa, trying to watch Tomorrow's World. My unnatural thoughts towards Judith Hann were entirely forgotten following a dreadful crash of glass in the kitchen. The sound of broken glass, and it was quite obvious from the start that we didn't actually possess a bottle large enough to make that kind of noise. Not even over my brother's head.

What had happened was this: Nigel had had enough of the argument, and had stormed out of the back door, intending to get his dinner from the chip shop. Determined to have the last word, he turned and pointed at Jill, to tell her where to stick her dwindling cheese supplies. Just as she slammed the back door with a hearty cry of "Fuck off!"

Unprepared as he was for a high velocity door, he didn't have time to get his hand out of the way, and his hand went right through the door's glass window, which shattered everywhere, but mostly over him.

His continued survival proves no serious damage was done, but there was blood and glass everywhere. And with the smell of fresh human blood wafting round the house, enter Snoopy.

He may have been an aging, rather cute beagle-cross-labrador-let's-tell-everybody-he's-a-foxhound, but the old wolf instinct clicked in, and he wanted flesh. Human flesh.

And so, Snoop Dogg made a dash for the kitchen, where mayhem reigned.

Bearing in mind the terrible fate that had just befallen my poor, lacerated brother, I thought it best to do what ScarySister said. I made a lunge for the rapidly disappearing dog, and just managed to grab him by the collar as he made his escape.

Good grief, for a small dog he couldn't half get some momentum going. Caught off balance, all I could do was stagger behind the rampaging beast as he darted down the hall, desperately trying to stay on my feet. I failed.

There was a hollow clunk, and the blinding white light of utter, utter agony.

"You thick bastard!" came my sister's voice from the kitchen, "Why'd you let the bloody dog out?"

She soon found out, as a blood-covered wraith appeared in the doorway, red stuff streaming from a gash in my head, down my face, clothes and over the floor.

"Never mind you," said Nigel, also splashing blood over the kitchen and an increasingly excited dog, "I could be dying here."

Dick is my father's best friend, and had been sent on a parentally-sponsored visit to "Just pop by to see everything's alright."

He arrived to find elder and extremely gothic sister clutching a cheese knife standing over the bleeding wreckage of her two younger brothers, glass everywhere and a dog that was clearly foaming, pink, at the mouth.

"We'll give you any money not to tell on us."

The different glass in the back door told the parents everything they needed to know. Not to mention our new and exciting scars. Terrible!
Posted by Alistair Coleman at Friday, May 05, 2006