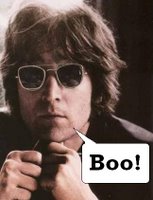 Someone at school got hold of a Ouija Board.

Dr Savage (Man of Bronze), our Religious Education teacher was horrified, and warned us of the perils of "meddling with evil things of which you are ignorant!" He would, he told us, go home and pray for our souls tonight.

Unfazed by the burning pits of damnation promised for the school's small band of sinner-sinners, a small group of enthusiasts set up the School Ghost Club.

Much like the infamous Wanking Club, this bunch of teenie Derek Acorahs set up shop in the school dark room, and set about their grim task with the home made ouija board and an upturned pyrex beaker stolen from the chemistry prep room, with the express task of making contact with the recently deceased John Lennon, to see if he had any decent tunes left in him.

As a hush descended over the room, with nothing but the red gloom of a photographic safety lamp casting an eerie wossname over proceedings, Geoff started calling out to the spirit world.

Not unless they did beans on toast on the other side.

After the excitement had died down, and one of our number was given the requisite beating for being a smelly-arsed bastard, we tried again.

"John Lennon! Are you there John Lennon? If you are out there, show us a sign. Move the glass! Speak to us, John!"

I don't know. He probably had better things to do, like naked bed-ins with spectral groupies. The last place any sane person - dead or alive - wanted to be was in a school darkroom full of idiots just outside Reading. I mean, the traffic's awful, for starters.

Graham insisted that all hands were made visible, and asked again.

The sound appeared to come from all around us, and rattled right to the very pits of our souls. Somewhere nearby, Doc Savage was probably on his knees, praying his hardest to save us.

When Lennon knocked twice for yes for the tenth time and a horribly distorted version of "I am the Walrus" played from out of the spectral ether, the Ghost Club fled, screaming, for their lives.

Someone, I swear, had already shat their pants.

And there, laughing his arse off as he fell out of the darkroom store cupboard was Ju-Vid, tinny tape recorder in hand.

He had earlier claimed he had homework to do and couldn't join our club. God, we should have seen through this right from the start. Ju-Vid never did his homework.

He got a right old kicking for his pains. Right in the Goo-Goo-Ga-Joobs, an' all.