Women cannot play golf. The main causes of this are two-fold, and entirely sexist.

I know I'm rubbish at the game, but at least I'm not hampered by two chesty protuberances that make it nigh on impossible. Unless I'm "dressed", of course.

"Son," I said to Scaryduck Jr, who is mostly harmless with a mashie niblick, "hide. I fear for our lives."

The lad recognised one of the players, a yummy mummy from his school, who looked far from yummy in her brand new tracksuit, and she thrashed around with her club like Tiger Woods on acid.

We watched, mouths agape, as Yummy Mummy actually took a run-up, thrashed her club at the poor, defenceless ball, missed, walloped her companion around the head with a three wood. We did what any sane audience would do under the circumstances: we laughed like a pair of stupids.

"Play through!" they offered. No bloody way. We're safer behind you.

And there was more. Yummy Mummy, this time eschewing the run-up, took another flail at the ball. This time, spectators were well out of the way, so this time there was nothing to stop the big round end from swinging round and catching her square on the head.

Could this possibly get any worse? There's always the take-another-huge-swing-and-let-go-of-the-club gambit.

Then they went home, defeated.

I'm turning into a golf bore, aren't I? 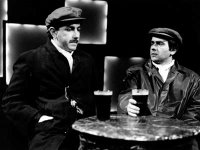 And just to keep you occupied on this, International Workers' Day:

What's the worst job you've ever had?

I once had to wrestle stolen supermarket trollies from drunken tramps, leaving me with the Great Smell of Wee. Lovely.

Also: Set Fire to the Internet
Posted by Alistair Coleman at Monday, May 01, 2006