The Even Further Diaries of Samuel Pepys

The Even Further Diaries of Samuel Pepys 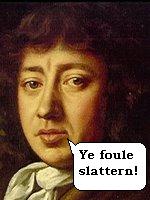 Oh Lordy, the world's first blogger, the not-manky-at-all Samuel Pepys is back again for a third, and God help us, final installment of his journal o'doom. Scribbling like a madman into his Letts Desk Diary 1666 (tuppence from Master W.H. Smithe's in Ludgate) we finally hear the truth about the cavalcade of buggery that was life in 17th Century London.

No wonder they burned the whole place down and started all over again.

The first two parts of this desperate procession of filth and wanton luste for ye nak'd bodies of fall'n women &c can be found here, here and the real thing over here.

August 27th 1666: Mrs Pepys has left for our country retreat, for the good of her health. She leaves with an entourage of half-a-dozen man-servants, hand-picked by herself, none aged more than twenty-five years old, "as a defence against ye plague", a view with which I thoroughly concur. I am pleased that these stout young fellows will safeguard my dear wife's fragile health, even going as far as making her carriage tight against the foul smells of London's streets. For I'truth, I heard with my own ears as the footman told her "We are going to fill your every hole, Madam Pepys" and she thank'd them profusely, already gasping from the foul odours.

August 31st 1666: Mrs Pepys is still confyn'd to her bed, quite unable to walk. Alas, it appears that her voluminous corsetry may have injur'd her on her flight into the country, rendering her quite entangled in the mechanics of her undergarments. Happily, I hear that Roger, the largest, burliest of her retainers, plans to "screw her arse off tonyght", and she is already gasping and cryinge with apprehension at her forthcoming ordeal. Godspeed you, sirrah!

September 1st 1666: Up betimes and to myne solicitors office where I am delivered of the moste dreadfulle news. My aunt Caroline, of whom I knew very little, has, alas expir'd at the age of 73. Mr Willington informes me that poor, dear Caroline didst employ herself as a high-classe slattern in Shoreditch right up to her demise, and had amass'd a pretty penny, of which I am the soul heir. This is what one calls a "resulte", and I shall be drinkinge to her fond memory with my friend Newton this evening, before investing the remainder of her fortune in donkey porne as per her detail'd instructions. I cannot shake the feelinge from the back of my mynd that I may have had use of her servyces at some stage these past years. Frequently, with gold'n showers.

September 2nd 1666: Up betimes and out to celebrate my rare good fortune with myne good friend Newton. We commenced our revelries at Ye Olde Pie Shoppe, and thence on to Ye Worlde Turn'd Upside-Down, Ye Crosse Keyes, Mrs O'Flaherty's Slattern Parlour, where I founde, alas, that I had already imbibed far too muche to perform to any great satisfaction; and thence on to several rough establishments whose names elude me; yet I find my purse is empty. Much of the evening is a sodden blur, the last event I recall being a conversation with Newton - who was on fyne form - in the Butcher's Arms in Pudding Lane, on the possibilities of heating this great city from the emissive gasses from one's anus, which he then demonstrated to a crowde of int'rested spectators in the street outside. There was much applause, and the passing of the hat rais'd near half a crown for our bar tab. Then, home to my bedde, where, damn my breeches, I was sick down a happily recovered Mrs Pepys' billowynge cleavage. Agayne.

September 3rd 1666: If the Watch come asking, I don't know anythynge about a bloodye fire.
Posted by Alistair Coleman at Wednesday, May 03, 2006