Mirth and Woe: The Nature Poo

Mirth and Woe: The Nature Poo 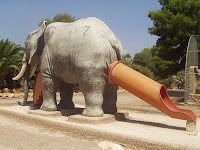 The coming together of man and the English countryside in a style rarely seen since Thomas Crapper came up with his big idea. Even rarer now that the Old Bill classes pooing inna hedge as a crime, making for PC Plod's easiest detection of the day.

The nature poo comes in many styles, from the careful organic composting of waste by bearded, sandaled types living on a commune in the middle of Wales; to the quick dump inna hedge or a hole in the ground, all the way down to the drunken scat on the way home from a Friday night pub session.

Many is the time I've found myself caught short in the middle of nowhere, and if it were not for my handy trowel (tomato seeds, for the burying of) in the boot of the car, Lord knows what I'd do. I have standards, you know: There's no way on God's Earth I'd go into a McDonalds, touching cloth or not.

I once had the pleasure of standing guard whilst one of my drinking buddies did a Nature Poo behind a wall on the way home from the pub.

"Shhhhcary" he slurred, "I needs a shit. Shtand guard. Make sure no-one sees my nob."

And he did, there and then, right behind the wall, opposite the chip shop, next to the estate agent. At least, then, it went to some good.

Unfortunately, he was unable to carry through the simultaneous tasks of squatting, maintaining his balance and squeezing out his breakfast; gettting his angles all wrong and laying a good length of nutty slack straight into his grundies.

Steaming drunk and disgusted at his own ineptitude, he tried to rip them off, only to find this was impossible whilst still wearing a) Dr Marten's boots and b) trousers, and ended up rolling around on the floor in his own filth, while the chip shop audience cheered him on.

Eventually the struggle ceased, leaving a semi-conscious drunk lying in the gutter, trousers round his ankles, caked in his own poo and vomit.

And round the corner came the familiar figure of a police car, hoping for chips, but getting a drunken turd.

I did what any young man would do when confronted with a friend in such dire straits.

I fled and left poor, shitty Pete to his fate.

I broke the pissant's number one rule in times of crisis: No Drunk Left Behind.

Next day: "What? They didn't arrest you?"

"They did at first. Then they took one look at me and refused to take me in."

So: Drunks! Avoid arrest! The Nature Poo is your friend.

A mate of mine has fallen victim of money-grabbing local council jobsworths.

Do him a favour by signing this 'ere Downing St petition.

That is all.
Posted by Alistair Coleman at Friday, October 05, 2007