On Having Your Say

On Having Your Say 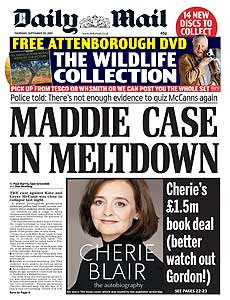 As you may know by now, many newspapers have fully embraced this new Web2.0 mullarkey and regularly allow readers to comment on their stories.

Of course, this means that any idiot can get their views in the national press with very little effort, or, it seems, education.

In fact, there is a rather excellent site which scrapes out the best of the BBC Have Your Say column and reproduces them on their own site to give us all a right old laugh.

I should know. In a terrifying piece of know-you-enemy research, I spent several months as a regular on the Super Soaraway Sun's discussion boards to find out what - exactly - makes these people angry. Muslims, mostly. And Poles.

It was an awful, awful experience in a place clearly stuffed to the gills with BNP agitators, with the strangest moderation of any website I've ever visited. Even the mildest of swearwords were banned, yet they held a "Page 3 Idol" competition where female forum members were encouraged to send in pictures of their norks. Strange days, indeed.

The Daily Mirror forum, on the other hand, is Maddie McCann conspiracy central. It has more fruitcakes than a village fete, and they are not taken by the kind of jokes that have stand-up comedians run out of Liverpool.

But there is nothing - quite nothing - like the lottery of posting comments on the Daily Mail's dreadful website in the hope that the official censor's having an off day and accidentally approves your comment.

The Mail's comments are moderated with a rod of good, stout, British iron, and it takes a special kind of piss-taking to get through the barricades and onto the screen. I am not very good at this, and herein lies the challenge.

It's an art. The Mail will only publish a comment that broadly agrees with the point of the article (which is, knowing the Mail "Aieeee! Dole scrounging Muslim Poles will kill us in our beds!")

Spurred on by those coves at Mailwatch, I have set myself the challenge of becoming a regular, stark-raving hang-em-and-flog-em regular poster at the Daily Mail.

Anyone can comment on their local rag's site or an unmoderated discussion forum. In fact, many are begging for any kind of interaction with huge swathes of local news emptiness. The Mail, on the other hand - bless 'em - have set the bar so high that it is a badge of honour to get through the censor.

"So, yet another example of our spineless government caving in to so-called BBC political correctness and lazy Polish Muslims stealing our jobs, women and children. Who pays their wages? Us - the British taxpayer. Bring back flogging - thank you Daily Mail for seeing common sense!"

I think that's all the bases covered.

Cover me. I'm going in.
Posted by Alistair Coleman at Wednesday, October 03, 2007

Email ThisBlogThis!Share to TwitterShare to FacebookShare to Pinterest
Labels: Arsing about on the internet, Daily Mail