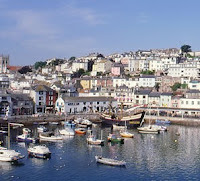 Coincidence is a funny old thing, with the potential to stop you in your tracks, drop everything and say "MUH?"

This is what happened to me last week, and the "MUH?" was accompanied by dropping my second best mug - containing half a pint of lukewarm Scout Hut Coffee - onto the office carpet.

The occasion was on the recounting of my Haunted Holiday ghost story, in which the entire Duck family fled a holiday cottage in the Devon resort of Brixham after spending several nights at the mercy of the dead fisherman whose house we were occupying.

As I reached the end of my tale, I looked up at the office TV - a forty-something-inch plasma effort, tuned to News 24 - which was airing a report on local policing in the English regions.

PC Plod was talking to camera from the harbour-side in Brixham. And there, just over his shoulder, I could clearly make out...

"Yeah, that's the house we stayed in - just there."

So, apart from the coincidence that you switched on your computer today fully expecting to read a blog post about one man's grapple with coincidence - tell us about your coincidences.
Posted by Alistair Coleman at Tuesday, October 16, 2007