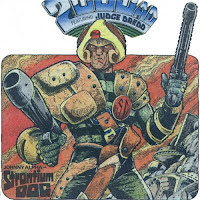 I am the bringer of excellent news. And it is this: I do not have skin cancer.

This comes as something of a relief, as I have been plagued by a mystery skin condition for several years that may or may not have resulted in both my arms falling off and my subsequent death by starvation. Not to mention the inability to play with my naughty bits.

What I do have is a form of psoriasis which comes in the form of a genetic mutation.

Or, as the doctor put it: "Congratulations, Mr Coleman, you're a mutant."

Actually, he didn't quite put it like that. It was more like: "Get out of my office, Mutie Pig", before burning all his office furniture. And did I mention his was the worst case of socks and sandals I have ever seen? I did not. People, eh?

I have spent the days following my diagnosis coming to terms with my mutation. As luck would have it, I have been blessed with exactly the same mutant powers as those possessed by Strontium Dog Johnny Alpha, allowing me to see through womens' clothing.

It's far less exciting than you think, a fact brushed over by Mr Alpha himself in his otherwise excellent 2000AD comic adventures. Prog 659 - entitled "Johnny, Wulf and Gronk fap over naked fat birds in Evans" - is particularly misleading if my personal experience is anything to go by.

To this end, I have spent my time hanging around the changing rooms in Matalan, Primark, QS and other top quality High Street boutiques honing my skills, hoping that I might, one day be accepted into a society dominated by so-called Normal People.

"Get out of our store, Mutie Pig!" they shout, shortly before calling the Police.

Strontium Dog gets his own comic strip, guns and all the women he can eat. I get an ASBO. Where's the justice?

The persecution of our superior mutant race has begun.
Posted by Alistair Coleman at Monday, October 22, 2007