On being told to stop being a bit of a git

On being told to stop being a bit of a git 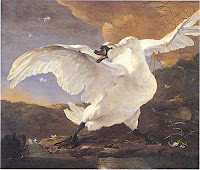 I am, as you well know, a sensible kind of chap.

For reasons that escape me, however, some people get the impression that I am, perhaps, a bit of a git. A bit of a git who encourages those about him to act like gits themselves.

I have no idea who keeps putting this about, but I suspect that a) I am married to her and b) she's right.

At the end of this month, the fragrant Mrs Duck and the now teenage Scaryduckling are off to the ballet, where they will sit in the second row, looking right up the male lead's tights in a production of Swan Lake. With added swans.

Already, I have found myself at the centre of a vicious smear campaign, in which I am accused of encouraging the young, impressionable Scaryduckling of shouting out "SWAAAAAAAAAN!" and "EGG!" during the quiet bits, and putting off the dancers by throwing handfuls of bread onto the stage.

So, I have done the sensible fatherly thing, warning young Scaryduckling that she should, on no account, neither throw bread at the dancers or shout "SWAAAAAAAAAAAN!" during the quiet bits. She will, instead, be sensible and show concern for her fellow ballet-goers.

She can do this, I have told her, by telling as many people as possible that a threatened swan could quite possibly break a man's arm with one flap of its wing. She may do this loudly, frequently, and especially during the quiet bits where she would otherwise be shouting "SWAAAAAAAAAAAAN!" as an important public health and safety initiative.

This warning is based on 100% of FACT, because I've read it on the internet so it must be true. Add this to the fact that Mrs Duck once had her entire right arm swallowed by goose (it grew back), it is abundantly clear that the world needs to be protected from angry fowl at all costs. And what better place to start this campaign than a production of Swan Lake?

My case: It is rested.

And yet, I still find myself told to "stop being a git". A man, it seems, just cannot win.
Posted by Alistair Coleman at Monday, October 08, 2007

Email ThisBlogThis!Share to TwitterShare to FacebookShare to Pinterest
Labels: ballet, being a bit of a git, swans