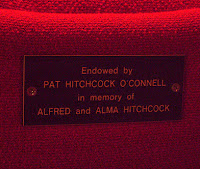 I spend a productive day at BAFTA in London's Picadilly last week, attending a conference on the future of television and broadcasting.

You may be pleased to hear that - yes - it has one.

Disappointed that I was that such an august institution should find itself sharing a building with a rather seedy casino, I finally came to the conclusion that the tramp begging for a cup of tea probably wasn't a well-known thesp getting his head round his latest role.

Despite my interest in the subject matter and copious notes, one thought dominated my mind that crisp Autumnal Thursday as I cut off at length in the British Academy's toilets:

"Wow. Alec Guinness, Olivier, or - God forbid - Gandalf have probably done a turd on this very shitter. Possibly all at the same time."

Starstruck, my buttocks have brushed with screen history, and have pointed percy at the very porcelain of entertainment greatness.

I am moved. As were my bowels.

The story does not end here.

Fully aware that TV's Mr Biffo was nominated - and cruelly overlooked - by the Academy for a BAFTA Award, I stuffed the Alfred Hitchcock Memorial Shitter with paper and yanked the handle repeatedly.


On Any Other Business

Oh noes! I has a teenager!
Posted by Alistair Coleman at Monday, October 01, 2007