On killing off Bergerac

On killing off Bergerac 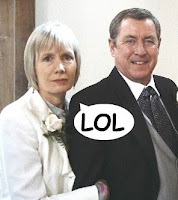 We're sad* to hear that John Nettles has decided to quit the gentle Sunday night gore-fest that is ITV's Midsomer Murders.

Every week, this bastion of crime-fighting solves mysterious killings in and around a group of villages that have a higher death-rate than Coronation Street and Albert Square combined. Heaven help you if you show an interest in bell-ringing, morris dancing or the local cricket XI, for this is little more than a death sentence from one of the area's dozens of unlikely sociopathic killers.

The general consensus is rather than hand over the mantle to a new cop Taggart-style and let the series gently fizzle out, Inspector Barnaby should leave with a bang, allowing ITV to draw a line under those whole series.

Even mediocre things have to come to an end, and that time – for Midsomer Murders - is now.

But how to end it? Simple.

For twelve years, our hero has thrashed around the county of Midsomer solving any number of hideous murders. All this time there has been one consistent factor: Barnaby's dull wife, standing at the back, cooking dull cakes for dull summer fayres.

She is – clearly – up to something.

All will be revealed in the final episode, where she is revealed as a mass murderer of Harold Shipman proportions, bludgeoning hapless victims to death with rock cakes simply to keep her husband out of the house while she has a wild affair with a detective from Jersey.

Shattered by this revelation, Baranby joins The Bill, where he is eaten TO DEATH by a gang of chavs within a week.