On killing off Heartbeat

On killing off Heartbeat 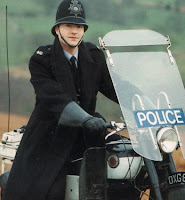 This site notes with a certain amount of smug satisfaction that ITV is to "shelve" its once-popular, heart-warming Sunday night drama Heartbeat.

Trapped in 1969 for the last eight years, the viewers have started to notice the cracks (such as Tricia Penrose playing the world's oldest teenager behind the bar at the age of 38) and audiences are now less than half than in the programme's Nick Berry-fronted heyday.

Its attraction – one supposes – is the predictability of the plots. Something bad happens in village, Claude Jeremiah Greengrass (or his uninspiring replacement) gets the blame, doctor's wife makes coincidental connection and village copper arrests outside, 60s standard plays in background. The end. Repeat. For eighteen years.

How then, we ask, are ITV's writers going to kill off this long-runner?

Logically, they should just merge the show with its Sunday night replacement, rename it Wild at Heartbeat, and have the entire cast fed to the leopards - a plot device last seen when they killed off London's Burning.

So, to save the ITV suits the bother, I've given this literally five minutes of thought and come up with:

AIDENSFIELD ARMS – INTERIOR – NIGHT. CHRISTMAS DECORATIONS ARE UP AND A PARTY IS IN FULL SWING

Music under: Something by Gerry and the Pacemakers

Wrinkle-faced former copper: Hold up everyone – it's nearly midnight

Lord Ashfordleigh: I say. Didn't the new police johnny say he was going to show his face tonight? Poor show all round

Comedy undertaker bloke: I saw him parking up his Cortina a little earlier, your Lordship. Didn't seem in the best of moods if you're asking me

World's oldest teenager: (Peers out of window) This could be him now... 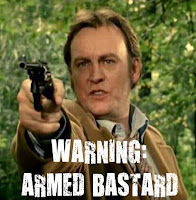 DOOR IS KICKED OFF ITS HINGES, GENERAL PANIC, GREENGRASS HIDES A FERRET DOWN HIS TROUSERS

PC Gene Hunt: OPEN UP! ARMED BASTARDS! YOU'RE ALL NICKED!

(I've just realised this is nowhere near as manky as my EastEnders - The Final Scene I wrote a couple of years ago, for which I apologise. I must be getting soft in my old age.)

That is all.
Posted by Alistair Coleman at Monday, February 02, 2009