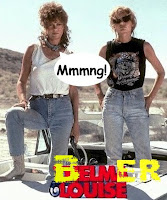 You know something? We haven't done offensive TV and film listings for positively AGES.

Today's mission is to provide the foulest, most offensive television shows and movie titles known to humanity, and whack them without mercy into my comments box.

To show that I am – as usual – an equal opportunities bigot, no subject is declared off-limits. Unless, of course, I decide otherwise, using my Patent Daily-Mail-Outrage-o-Tron.

If anything, this will probably see off all the new readers I've picked up in the last month or so. Here we go:

- Butch Cassidy and the Sundance Flid
- Paedos of the Carribean: Dead Flat Chest

Get in there!
Posted by Alistair Coleman at Monday, February 16, 2009