The Death of Television 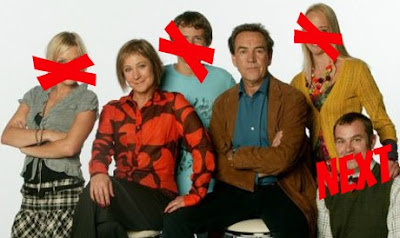 TV on, and I accidentally catch yet another repeated episode of "My Family" on BBC1.

You can tell it's one of the later ones where they're not even bothering, as it's the one where Robert Lindsay is desperately trying to dispose of the dismembered corpse of one of the faceless teenagers, knowing full well that the next episode will feature a new faceless teenager, driving poor, demented Robert Lindsay to another desperate act in the name of so-called comedy.

And BLAT! Right in the middle of an advert break, where one of those dreadful BT Students is Googling the best place to dispose of a recently dismembered corpse, and the glamorous girl student is looking at him with all rolling eyes because he's a stupid idiotic male, while the other bloke flatmate isn't doing anything at all on account of the shovel through the back of his head.

I remember the days before they had an in-house television production department at Dignitas.
Posted by Alistair Coleman at Tuesday, May 15, 2012