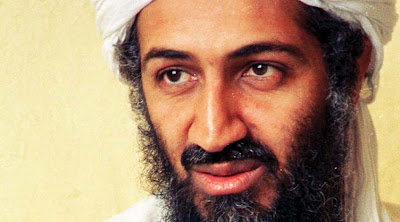 The recent publication by the US government of documents found in Osama Bin Laden's compound show that Al Qaeda leader becoming increasingly frustrated at how the conflict against the Yankee-Zionist infidel was going. For eg: Having his arse kicked all over the Middle East and beyond.

With all his best plans coming to naught, the documents showed that my Arsenal pal Osama had even made attempts to reach out to Irish extremists with the view to destabilising the United Kingdom. Doomed to failure, of course, as the first and last contact would bring the reply: "So, are ye Protestant Al Qaeda, or Catholic Al Qaeda?"

His only source of intelligence being the film "Four Lions", poor dead Osama was reduced to petty acts of terrorism in the hope of bringing Britain to its knees from within:

- Get a job at McDonald's, volunteer for the litter patrol, and dump all the litter at Burger King. The resulting war between the burger chains will result in the needless deaths of thousands

- Ring all the "How's My Driving?" hotlines on the back of lorries with false reports of bad driving. Before long, every single lorry driver in the country will be either suspended or sacked, bringing about the collapse of the UK economy

- Go into Starbucks, make a large order, telling the barista that your name is "Heywood Jablomie". Being the 10,000th time he has heard this gag on this day alone, he will run amok through the town centre mowing people down with an electric coffee grinder (may be a suicide mission)

- Order pizza from a well-known takeaway, and give your address as that of their branch on the other side of town. Ring the other branch and do the same, and wait for their delivery drivers to collide on the bypass, causing rush-hour chaos

- Get a job at a major broadcaster, and stripe The Only Way is Essex and fly-on-the-wall reality shows about D-List celebrities across the schedule. The resulting stupor will strip the nation's pharmacies of Prozac, and the resulting social unrest will result in riots on the very streets (This may already have happened)

- Change your name to Nick Clegg, run for major office, and destroy Britain from the very top (This may also have already happened)

Remember kids: This is all for fun. Terrorism in neither big nor clever, and should never be tried at home
Posted by Alistair Coleman at Thursday, May 17, 2012