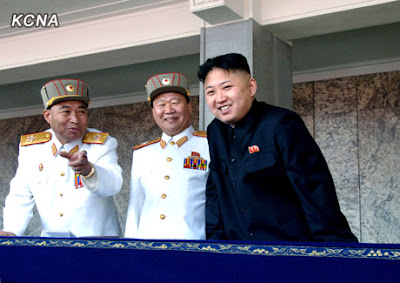 It must be terribly hard work being a military dictator these days, having to spend your nights with one eye open in case the down-trodden proles get ideas above their station and run amok through the streets in brazen revolution while you have to flee for your life down a sewage pipe. And after everything you did for them too, such as saving the nation from naked Yankee imperialism, equally naked British colonialism, and whatever it is they do in Russia with no clothes. Then there was the time you rescued the country's riches by squirrelling it all away safely into numbered Swiss bank accounts. And that's the thanks you get - living, terrified, down a hole.

It's the kind of thing that makes Bashar al-Assad wish for the quiet days when he was an optician, rather than killing unruly subjects to death.

That is why I'm not surprised to see on the website of the peace-loving North Korean official news agency (currently urging its readers to "cut off the windpipes of the South Korean president and his band of rats") recent photographs of North Korea's Young Generalissimo Kim Jong-un, in which the former East Asian heavyweight has shed a few stone and looks the kind of young, thrusting young dictator who should be running a repressive, murderous military-led one-party state these days. The stress of it all must be doing his head in.

Either that, or he tried out the escape capsule in the Presidential Palace and it told the portly Eternal Leader of the Songun policy-inspired revolution that it is "Maximum load eight persons".

I'd be ashamed if the escape capsule in my secret lair (which I haven't got, most certainly not at the bottom of Poole Harbour in Dorset where I'm not testing a number of top secret doomsday devices aimed directly at the cold heart of the Sandbanks millionaires row) told me that I'm a bit of a bloater, and I would absolutely set about launching missiles here, there and everywhere in defiance of UN resolutions if it also told me I had a haircut done by my mum. No wonder he's changing his image. How, we ask, does he do it?

Why - it's DICTATORCISE, the military-first exercise plan that's taking all the world's dodgy regimes by storm. Coming soon to a Fitness First near you - Goose Step yourself to a rock-hard bum, and sleek hips and perfectly sculpted thighs. As seen on TV's The Apprentice!

And while you're marching marching marching on the puppet regime of Yankee imperialists and aggressors in Seoul with the triumphant sound of DICTATORCISE ringing in your ears, why not try the North Korean Peasants Diet? Guaranteed results* as you discover the benefits of tree bark, grass and the remains of a crow to your health and well-being. 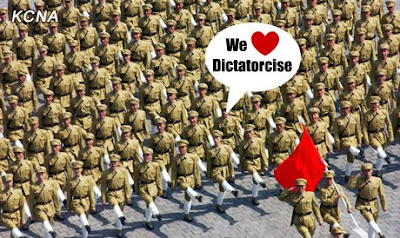 Syria's Bashar Al-Assad swears by it: "DICTATORCISE: It's fucking great, you fucking fuckers".

Be a sex god like Kim Jong-un. Discover DICTATORCISE**

If this man didn't have nuclear weapons and a hangar full of malfunctioning rocketry, it'd be funny.