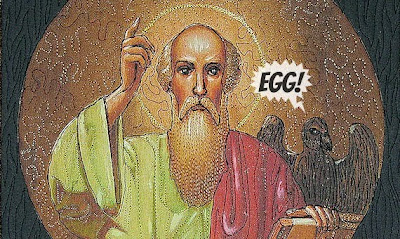 Today is the feast day of Saint Aaron. Little is known about him, except that he is the patron saint of businesses who want to appear on first page of the phone book, until usurped by Saint Aaaaaaaron, and latterly Saint 111111Elite Window Cleaners.

Saint 111111Elite Window Cleaners was martyred in 1152 by falling off a ladder. His last words were "Aaaargh". He is also patron saint of 1970s sex comedies.

Saint Aaaaaaaron went on to become the patron saint of sticky keyboards, until losing out to Saint Ron Jeremy. Not to be confused with Saint Zzzzzzzachary of Zzzzzyz, patron saint of people with improbable and made-up names.

Here endeth the lesson.
Posted by Alistair Coleman at Monday, May 28, 2012