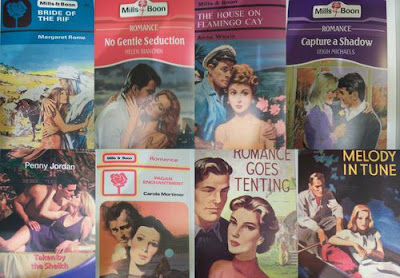 Everybody loves a good book. But every now and then you find yourself trapped on a toilet or on a long journey, or on a toilet on a long journey with nothing to occupy your mind but romantic pulp fiction, in which a chaste your heroine eventually finds her one, true love, usually after having a hard time at the hands (and hands ONLY) of some unlovable rogue.

The story of Mills and Boon romantic fiction is a long and chequered one. Did you know that none of the following is true...

The word 'Bumhole' has appeared in the Mills and Boon canon on only three occasions. Two of these were the result of misprints; the third appearing on the final page of Barbara Cartland's final work called "Fuck it, let's just write some proper filth, just this once"

Students of the craft of the romantic novel were surprised by the publication in 2002 of Felicity Volestrangler's "Bum Raiders of Astrakhan", which was a chaste tale of redemption featuring one woman's love for a drunken pirate captain on the River Volga

The romantic publishers caused controversy during the Second World War years, releasing "Slanty Desires" immediately after Pearl Harbour, on the bookshelf next to "Duchess Belinda's Schnitzelwurst". Both were subsequently banned by the Lord Chancellor's office

The British Broadcasting Corporation owns the TV rights to all Mills and Boons books, which is airs under the series name "Casualty"

JK Rowling's next announced work will be a short series for Mills and Boon, featuring a grown-up Hermione Grainger's chaste search for true love. The first title "Ginger Lavatory Lust" will be on sale this autumn

Thanks to evidence given by Boon, Mills has been declared a terrorist organisation by the United Nations*

Mills and Boon, however, are phasing out the use of human authors, thanks to the introduction of a clever computer application that - given a database character names, locations and sample plots - will churn out romantic novels at the rate of six a day. Similar programs have "authored" the readers' letters pages in pornographic magazines since 1985

* I may have actually confused Mills and Boon with the very similar Ayman al-Zawahiri**, who wrote romantic pulp fiction before he took up the whole global jihad thing

** Now we're getting down a rabbit hole - Saddam Hussein actually WAS a romantic novelist, and look how he ended up
Posted by Alistair Coleman at Friday, May 25, 2012