Mirth and Woe: Fishing, and why it is shit 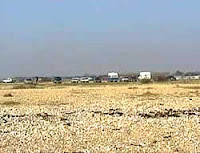 A post nuclear wasteland near Bognor Regis where people go to die.

Pagham is a place that is completely and utterly dull as far as the eye can see. There are dunes of rough shingle, and a few scrubby plants clinging on for dear life in the teeth of endless gales. There is a nature reserve where everything is dead; and huddled on rough, un-tarmacked roads, a small community of the near-dead that choose to live there. And nothing else.

If a tree grew there, it would only attract suicides, hanging from the lower branches, a smile on their face from the blessed relief of escaping that place.

For some reason it attracts people, presumably put off by the usual south coast tourist traps, who drive up, nose around for half an hour, and then leave, never to return.

Somebody told him there was fishing to be had on the beach and the inlet to Pagham Harbour, and he dragged the entire family down there on several occasions to watch The Mighty Fisherman in action.

Seaweed capital of the world. Or, to my father, world's number one beach fishing venue.

You've got to hand it to him, he was so keen on the fishing thing that he made his own tackle box with built in seat. It weighed, when full, about eighty pounds and took two people to carry the thing. Which is, in retrospect, why we were forced out of our beds on perfectly acceptable Sunday mornings to watch a grown man not catching any fish, ever.

We sat there, for hour, after dreadful hour, casting his bait into the brine, reeling it in, and then spending the next ten minutes pulling all the seaweed from his hook. Then he would cast yet again and continue the entire depressing process.

As you can imagine, sitting on a windswept beach with nothing to do but watch an ever-growing pile of seaweed is nobody's idea of fun, an ordeal made all the worse by the sight of the bright lights of Bognor Regis just a few miles down the coast.

Bugger Bognor? Bugger Pagham. There was, we discovered, one ramshackle amusement arcade. But it was a good half-an-hours walk away staffed by trainee serial killers, the result of several generations of forced in-breeding, the only pastime worth pursuing in such a desolate place.

Depressed, we trudged back to Dad's fishing spot, to find he had moved to a nearby tidal inlet where the catch of seaweed was even more spectacular. Several other fishing types had joined him, casting in their lines and drawing out crap, their bored families sitting nearby, contemplating the joys of self-immolation.

Nigel and I explored a bit, but there's only so much flat, empty, tidal mudflat that a teenager could take, so, resigned to our fates, we trudged back. And there, half hidden in a bit of scrub, we found a drop net.

It was a round hoop with a bit of fishing net stretched around it. You dropped it into the water and a cord, and hauled out whatever swum into it. If you can't beat 'em, join 'em, we thought, and Nigel and I took turns at hurling the net into the water and drawing out seaweed. Lots and lots of seaweed.

If anything, we were better at catching seaweed than all the adults put together, and we weren't even using bait.

Then, by some amazing stroke of luck, Nigel pulled the net from the water to find: A fish.

It was, I discovered, the first fish caught in the area since the early 1950s. It was about six inches long, and an ugly face unseen on these shores until the emergence of Jade Goody onto television screens some years later.

As word of our fortune spread, fishermen literally threw their rods to the ground and ran over to see our catch.

The admiration didn't last as the green monster of those who had spent several hundred pounds on fishing tackle, only to score the square root of fuck-all noted they'd been outdone by a couple of teenagers with an excitable dog.

"I hope it's poisonous, you terrible cults."

We never found out, for Snoopy, never one to miss out on a free meal, elbowed into the crowd, pounced like the only-one-meal-away-from-a-wolf that he was, and swallowed Spiny Dave like a tiny piscine snack.

The food chain can be a bastard if you're a very small, ugly fish.

"That's it! We're going home!" said Dad in a tone of voice that suggested that we would never return, ever, and there would be a ceremonial burning of the fishing tackle before the weekend was out.

We dragged the Great Tackle Box back to the car, piled in and hit the road for home, planning to nuke the place from orbit for the safety of those tempted to follow.

It was a mere five minutes up the road, with Bognor barely in the rear-view mirror, that this story reaches its inevitable climax.

Dog and fish do not go together.

Dog and cursed fish in a car that has been sitting in the burning sun all day are even worse.

We never returned to Pagham ever again.

Fishing: It is shit.
Posted by Alistair Coleman at Friday, September 14, 2007