Mirth and Woe: The Place Where You Did A Turd

Mirth and Woe: The Place Where You Did A Turd 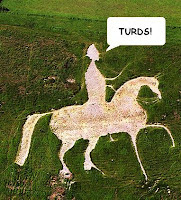 The autumn of 2001. The world cowers at the terrorist threat of Osama bin Laden and his ilk. Our elected leaders prepare for war in Afghanistan. The Duck family is down in Dorset looking for a place to live.

One of the houses we liked the look of was in the village of Osmington, about three miles to the east of Weymouth, home of the White Horse that Anneka Rice managed to turn grey for a TV stunt. The house was at the end of a cul-de-sac overlooking rolling countryside, and was but five minutes from the beach.

Alas, with a pair of young children, it was totally impractical, as there is no village school with the nearest being some miles away. We didn't like the idea, even when they reached their teenage years, of having to stand on a main road, waiting for a bus, while tourists used Osmington as a race track.

The people who owned the place were a lovely elderly couple, looking to move somewhere smaller before eventually downsizing to a wooden box. They showed us the house in great detail on a tour that I thought might never end, making a real fuss of the kids.

Tea, cake, fizzy drinks, sweets: nothing was too much for them. They were either charm personified, or desperate to get rid of a house they couldn't sell.

With the afternoon fading into evening, the boy Scaryduck Junior posed a question.

"Can I use your toilet?" he asked, stuffing away his third slice of cake.

"Of course you can," the old bloke replied, "you know where it is, don't you?"

So of he went to do his business, as we got ready to leave and view the next house (which was, as it turned out, the place we eventually purchased).

We got half a mile up the road when something struck me.

"Did you remember to flush the toilet? You were pretty quick in there."

"Was it number one or number two?"

"Number two. And it was enormous."

I put my put foot down, and fled Osmington, possibly forever.

Meanwhile, back at the house:

"Weren't they a lovely, charming family."

Osmington is now known as "The Place Where You Did A Turd", which would read much better in any tourist guide.

The village also has a rather excellent pub called The Smugglers. Or, as Mrs Duck called it in a fit of amnesia: The Bloody Sailor.

And The Bloody Sailor it will now stay, in The Place Where You Did A Turd.
Posted by Alistair Coleman at Friday, September 07, 2007