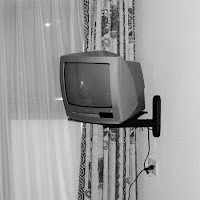 Duty trips can be described - like warfare - as long hours of boredom with brief periods of intense excitement. Only, in the main, without the excitement.

I find myself, for reasons of budget, spending long hours in hotel rooms with only CNN for company, trying to find new, legal ways to amuse myself.

On this particular trip to darkest Amsterdam, I have found that by switching rapidly between channels 11 and 14 of my ancient hotel television, I can get the briefest snatch (as it were) of the subscription smut that other, normal, single male travellers might otherwise be paying for.

Quickly enough, and you get a reasonable enough picture to raise a semi as you get to watch two movies at once and witness some bloke getting his pink oboe serviced on one channel whilst a young, excitable young lady gets shovelled from behind on another.

Alas, I can do nothing else, as I am too busy switching between the channels for all I am worth.

Then I give up, and watch The Princess Diaries II, dubbed badly into Dutch. Mmmm... Julie Andrews.

I finally surrender and return to CNN, where Pavarotti is still dead.

What I really need is a hobby of some kind.

Of course, being in Amsterdam, you could just walk the streets...

(I am told by a friend that he once rang down to the front desk to report that the smut channels weren't working. "You're the tenth person to call," said the receptionist, knowing full well that his establishment becoming a seething mass of sexual frustration, "Stand by while I reset you".)

This is going to be the best Christmas Walford's ever seen.
Posted by Alistair Coleman at Wednesday, September 12, 2007