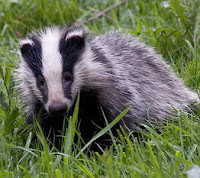 As foot and mouth disease strikes the wilds of Surrey once more, we are told that - for our own well-being - the countryside is closed.

The countryside - and God alone knows I get to see enough of it on my massive petrol-guzzling commute to work - smells of poo, as does everybody who lives there. I know this for a fact, for I was once forced to live next door to the countryside, where they imported poo specially when they found out it didn't smell enough.

It can stay closed forever as far as I'm concerned.

The last time I left the safe, warm cocoon of my car in the so-called green-and-pleasant countryside I got food poisoning off pie, and was told to "Get of moi land" from some green-wellied bloke who stunk of poo, whose idea of a top-name badge for his car was "Massey Ferguson".

You would have thought that he would have welcomed the extra nutrients provided by my being sick in his hedge, but it just goes to proves there's no pleasing some people.

"But Scary!" you say, "I can see the flaw in your plan. Where will we get our food from if we close down the countryside forever? Answer me that, you dreadful petrol-headed murderer."

Ah-ha! I have an answer to that. A dead clever, very tasty answer.

The only thing the countryside is good for is roadkill. They should do away with speed limits in all rural areas, and let us mow down anything that dares to meander into the middle of the road. Rabbits, sheep, badgers, ramblers, farmers and fox-hunters alike. All game, provided that you scrape it up and eat it.

In fact, we can close down the countryside altogether (thus eliminating the risk of all this foot and mouth, blue tongue, scrapie and all the other hideous diseases that making Farming Today such a riveting listen of a morning), and the human race can live well enough off anything we can peel, ready-cooked from the radiators of our cars.

And once the Soylent Green factory's up and running, we can pave over those pesky graveyards with more windy, high-speed country lanes, freshly stocked with meat.

Arrangements will be made for vegetarians. You'll starve.


Edit: The minute I get put in charge of bulldozing the countryside, the first thing I shall do is built a motorway directly to this place.

I am still not mad.
Posted by Alistair Coleman at Wednesday, September 19, 2007

Email ThisBlogThis!Share to TwitterShare to FacebookShare to Pinterest
Labels: countryside, foot and mouth, I am not mad, Pie