The rather excellent author Andy Tilley got in touch, and without hardly bribing me at all, asked if I could plug his new book. Liking our humour as dark as possible, we (and that is the royal 'we') decided to play along.

And here's something he sent me on the subject of bad taste: 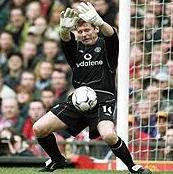 A slight exaggeration I suspect (it’s a common enough name after all and it wouldn’t surprise me to find out that there’s in fact hundreds of ‘em) but nothing particularly awesome about the claim. The reason I mention it here though is that this was the content of a simple football chant, directed at the newly signed Ranger’s goalkeeper by supporters of their arch rivals Celtic. The reason? Well, shortly after joining Rangers FC, the unfortunate (and crap anyway) Mr Goram was diagnosed as having schizophrenia. So the question is, who amongst you (and be honest here because you’re only fooling yourself) wouldn’t have raised a smile having heard ten thousand Celtic fans chanting this abuse as you munched on your meat pie during the warm up? I for one would have choked on the pastry. But is it right to make a joke about someone who has only just found out that they have a potentially life changing disease?

You know, I have absolutely no idea. I mean, what exactly are the rules here? Are there any? This question is something that, as a fiction writer who plies his trade on the darker side of comedy, I constantly have to be aware of. For example, in my first novel, Recycling Jimmy, there’s a passage in which the two heroes are dissecting the bones of a rather tasteless idea, that being suicide for profit. The discussion centres on people’s reaction to catastrophe. The whole scene is driven by the Hindenburg disaster and is at best irreverent (remember the footage of that geezer finally deciding that he couldn’t pull the big balloon back down on his own, but unfortunately waiting ‘til he was 200 foot in the air?). Of course, I’m not the first to take this subject matter and use it to underpin a gag. One of my favourite Simpson moments concerns the almost instantaneous destruction of the Duff blimp after it snags an impossibly high antenna. In this case the punch line is delivered by the crowd’s reaction.

‘Awe man, this is the worst air ship disaster ever!’ they cry.

‘Too fast, too fast!’ they complain.

I’m smiling again now. So where are the boundaries? I’ve laughed twice whilst writing this, on both occasions at some one else’s misfortune. Well, for what it’s worth (and I’m only putting this out there, I’m certainly not claiming to be an expert here) I don’t believe that there are any boundaries in subject matter; bad taste or good taste isn’t really the issue because taste is such a subjective attribute and so can’t be accounted for with any certainty, especially if your trying to write something that you hope will make people in general laugh. No, the issue here as I see it is not taste but tact. Even the funniest wise crack, if delivered with a lack of tact, will wreck a cocktail party quicker than a turd empties a swimming pool. Case in point there, and consider the following passage from a work in progress. In the scene Danny is trying to illustrate pretty much the same point as I am and he tells his friend, Sam, the following joke.

‘There’s these two scousers visiting New York, just after nine-eleven. Anyway, they end up down at ground zero watching the clean up going on. There’s a crowd there but everyone is behavin’, paying their respects an’ that, all stood in silence with their hats removed and held to their chest. Anyway, one of the scousers notices that his mate’s still got his Burberry base ball cap on so he nudges him and tells him to take it off. Well anyway, stood next to them there’s this New Yorker and he over hears them talking. He gently taps the first scouser on the shoulder and says quietly, ‘Gee, boys, I hope you don’t mind me asking but I just happened to over hear your accent there and I wondered where abouts is it you’ve come from?’. The scouser looks him up and down and then whispers back. ‘We’re from Liverpool pal’. The yank thinks for a moment but of course, he doesn’t recognise the place so he asks ‘Really? And what states that in?’ The scouser looks at ground zero then back at the Yank and says ‘Erm, pretty much the fuckin’ same as this pal.’

Now I have no doubt at all that the subject matter of this exchange could be considered wrong on many levels. There is simply nothing funny about the destruction of the twin towers or indeed the level of urban decay that Liverpool is, rightly or wrongly, renowned for. What allows this joke to exist though is its tact, and in this case I mean the frame of reference from which very emotive issues are addressed. There’s nothing nasty about the scouser’s reaction to the place or the events that happened there. Similarly, the American’s innocence excuses him from any blame in his unintentional slur about Liverpool. The result? You're safe to laugh at this one without being labelled a sicko.

That is all.
Posted by Alistair Coleman at Thursday, September 13, 2007