Mirth and Woe: Strangers on a train

Mirth and Woe: Strangers on a train 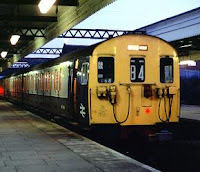 I left school at the age of sixteen. Not because I particularly wanted to, but because my parents were under the impression that our school sixth form - within walking distance of our house - was rubbish, preferring to send me to a college two train rides away.

Every morning, I had to get myself by bike to Twyford station - some two miles from the house - in time for the train to Reading. Providing this train ran on time, I'd make a connection with the 08:32 to Bracknell, and I'd get into town with ten minutes to spare. Ten minutes to leg it through the dreadful concrete shopping arcade and up six flights of stairs to the Science labs.

I left three years later with a Grade D in Physics and two Grade Es in Maths and Chemistry, rather pissing on the entire Bracknell-College-Better-Than-Piggott-School-Sixth-Form argument, which had rather neglected to take into account that the school was not within 100 yards of the nearest pub, and my sodden downfall.

The whole upshot was that I qualified for free rail travel due to the distance I had to travel every day. Naturally, I kicked the arse out of it and used my pass morning, noon and night for whatever reason I could think.

The trip from Twyford to Reading only took about seven minutes, and being on a major commuter route, the trains were nearly always packed to bursting.

From Reading to Bracknell, however, it was a different story. The line hadn't seen any serious investment for years, and with Thatcher running the whole shebang, it wasn't likely to either. The trains were awful, dated antiques, an accident waiting to happen (and, at Clapham Junction, sadly, it did).

The 1950s carriages were comprised of compartments. You got in at one door, sat in a compartment of eight seats, and there was no other way out. Heaven help you if you wanted to go to the toilet. At least when I was caught short, I went out of the window like normal people. The lingering smell proved that not many others did. Or, if they tried, the wind blew it all back in.

It may be warm leaving you, but I can give you my personal testimony that it's freezing cold by the time it is blown back into your face. And the occasion I boarded a late-night train to be confronted with a huge, curled turd on the floor - too late to change compartments - will live with me forever.

These trains also meant that if you found yourself in a compartment with a nutter, you were stuck with them until the next station. The eight minutes from Wokingham to Bracknell, we mused, was just long enough to bump someone off and throw the still-twitching body into a ditch as the railway ran parallel to the motorway.

Judging by the sounds coming late-night from adjacent compartments to ours, couples were using their new-found privacy for other, bouncier pursuits.

The lucky bastards, for I was still pursuing the sexless Debbie Lucas at this point and not having bodily contact with any female flesh at all.

I must confess that these late night trips back from Bracknell and Wokingham pubs had their moments.

Lurching along on our way home one evening, the train ground to a halt at a signal just outside Reading. This was nothing new. One of my hobbies of the time was looking in through other people's windows, and this particular stretch of railway line, passing as it did along the back of a row of terrace houses in one of Reading's seedier suburbs, was perfect.

Nobody, but nobody pulled curtains along that stretch. But then, there's only so many naked men in bathrooms you can take.

We sat there, bored, for about thirty minutes, and it soon became clear that something was going on at the station that prevented our train from arriving. It later transpired that a drunk had fallen onto the line and broken his leg, and it was taking quite some time to switch off the live rail and scrape him up before he got himself killed to death.

I was not to know this, as I relieved myself out of the window.

Then, with a hiss of brakes, another train pulled up alongside us. The queue for the station was so big, they were doubling up, I noted, still the recovering train-spotter.

And there, in their own eight-seat private compartment were a sporting young couple, partaking in the Acts of Venus. Acts which, by the expression on his face, were about to reach their sticky climax. His hairy arse bumped up and down rhythmically, while the young lady looked, by turns, totally drunk and bored out of her mind.

I might have shouted a few words of encouragement.

Actions which were copied by my travelling companions and partners in drink.

"Any chance of sloppy seconds?"

They got raving mad.

Then, we took turns to pee out of the window at them.

They told us we were "fucking dead meat".

"By the look on her face, it looks like you already were," I said, making this particularly witty comeback from the safety of the Public Bar in the Old Devil the following night, shortly before finishing my eighth pint and bowking dry roasted peanuts into a hedge.

These days, we would have filmed it and put it on YouTube.
Posted by Alistair Coleman at Friday, September 21, 2007