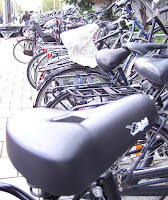 For the ardent sniffer of women’s bicycle saddles, this represents the greatest opportunity western Europe has to offer in pursuing this noble and highly competitive art-form.

Indeed, with the Beijing Olympics only a year away, and with the restrictive ban already in force in the traditional university sniffing grounds of Oxford and Cambridge, Amsterdam has the potential to become an essential training ground for British athletes in what will be a demonstration event at the 2008 Games.

While this great Dutch city draws many a novice saddle-sniffer from the UK, undoubtedly drawn in by seedy stag night trips across the North Sea and the hope of the heady aroma of sweating Dutch buttocks, the hard-core followers of the art leave frustrated and broken men from a country that offers so much, but cruelly gives so little.

The problem lies with the otherwise affable, friendly Dutch people, who, it appears, care little for the style, control, damage and aggression that British – and by God - French cyclists aim for. Sacrificing quality for quantity, there are lean pickings for the followers of the saddle-sniffing art.

There is, confusingly for the ardent sniffer, only one kind of bicycle available in the Netherlands, a model crafted from scaffolding poles and tractor parts that looks like something your granny might have ridden, had she been an East German shot-putter.

As soon as the average Dutch shows an inkling for the bicycling arts, he or she is levered onto one of these bone-shakers, last ridden by grand-pappy before his lifeless body was ground up and served to unwary smokers in an Amsterdam coffee shop, and the machine is spray-painted pink to ease identification outside any given Metro station.

Thus, when the Olympic sniffer-in-training spies a likely saddle, still damp with the sweaty exertion of the owner’s ride up the dyke, he is in the awkward position of not knowing who, exactly, last parked themselves on that particular velocipede.

Were they the pert young buttocks of some curvaceous young thing, riding serenely along the cycle-ways chatting to a friend on a mobile phone, scattering unwary pedestrians in her path; or some haggard old bloke called Dirk, on his way to muck out a sewage pipe under Centraal Station, each bump in the road playing merry hell with his already bleeding haemorrhoids?

This thought alone is enough to drive any trainee athlete into a state known amongst aficionados of the sport as “bat-shit mental”.

On discovering that their intended target is indeed ridden by a nineteen-year-old muscle-bound clog carver from Gaasperplaas, the frustrated sniffer invariably reels away to be sick inna hedge, or onna dyke - whichever is nearer – before vowing never to sniff another bicycle saddle again.

And what a loss this would be to Team Britain’s hopes for Olympic gold.

There are, that warbling bint Melua tells us, nine million bicycles in Beijing. And you can bet your bottom dollar the Chinese have got crack squads out there, sniffing each and every one from morning until dusk, Olympic gold already in the bag.

No National Lottery grant can hope to keep up with that, and Lord Coe should hang his foppish head in shame.

I am not mad.
Posted by Alistair Coleman at Monday, September 17, 2007