On things I saw on a particularly eventful trip to work

On things I saw on a particularly eventful trip to work 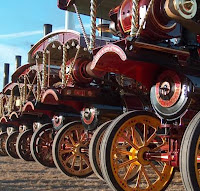 Like a fool, I decided to attempt driving through Dorset in the wake of not one, but two major agricultural shows this last Monday morning. Every last tractor, fairground ride and steam traction engine in the world was in front of me, doing 10mph on roads with grass growing up the middle.

If Fred Dibnah wasn't already dead, I'd dig him up and kill him to death.

The idea of the Horseless Carriage having not quite reached this particular part of Wessex (there was, until 1987, a man who was paid genuine cash money to walk with a red flag through the streets of Weymouth in front of steaming locomotives), once every Tom, Dick and Barleymow gets their one-sheep-powered pantechnicon in front of your sleek, sexxxy 1996 Ford Escort, you are as good as stuck in Dorset for the rest of the day.

At least, then, you get a good look at the rolling countryside, as it rolls past you very, very slowly.

Things I also saw on my snail's pace crawl through the southern counties of England:

* Norbert Dentressangle - he gets everywhere, you know

* Dead badger that appeared to be singing "My Way". That is, sadly, what you get if you hold an impromptu concert in the middle of the A35 during morning rush hour.

* An old lady engaged in a particularly animated conversation with a large, burgundy wheelie-bin. Heaven knows what she was saying. Almost certainly not "Where's your wheelie bin?" "I weally bin having a wank."

Rewind a bit. I eventually arrived at a roundabout notorious for its hideous accident rate, to find the emergency services scraping up after a hideous accident involving - seemingly - the remains of a MiG-23 jet fighter. There, I spotted a seen-it-all-before ambulance bloke sheepishly carrying an arm into the back of his vehicle, where he was either going to re-unite it with its former owner, or save it for his lunch.

So stunned was I following this epic crawl to work, that when I went to have a lunchtime haircut, I completely forgot to leer up the T-shirt arm-holes of the barbershop lady, who stunk like an ashtray into the bargain.

"Been on holiday this year?"

I might start taking the train again. In fact, tomorrow, I will. And a plane. For I am off to that Amsterdam for a week. Arrangements have been made to deliver your regular supplies of mirth, woe and sick inna hedge.
Posted by Alistair Coleman at Wednesday, September 05, 2007