The Dawn of the Video Age: A Tale of Mirth and Woe

The Dawn of the Video Age: A Tale of Mirth and Woe 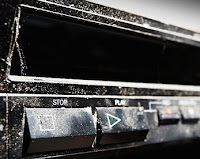 "What do you recommend?"

Our family had joined the video age with the purchase of a top-loading Panasonic VHS machine wth clunking great buttons on the front.

It had cost the best part of four hundred quid, and another forty was blown on two tapes to feed it. One was the good-but-not-brilliant Porridge movie from which I have gleaned my lifelong "Our ordeal is over" line, and the other was blank.

We immediately recorded Jaws on the E-180, and couldn't record anything else until a major pay rise funded some more blanks.

I was, then, ordered to join the corner shop's newly-formed video club and get in some top-drawer family entertainment.

"What do you recommend?"

"What are you after?"

Comedy. If there's one thing that brings a family together - and ours in particular - it is comedy.

We all sat round. Family. Friends. A few guests who had never seen a VCR in operation. Solemnity mixed with a little bit of excitement, all thanks to the magic of Hollywood.

"Get the fuck out of here!"

"Get the fuck out of here!"

In retrospect, Beverly Hills Cop was a fucking awful choice for a family movie.

"Well. That was pretty fucking poor, wasn't it?"

Elderly aunts, eh? Holding a grudge against Eddie Murphy all the way to the grave.
Posted by Alistair Coleman at Friday, November 27, 2009

Email ThisBlogThis!Share to TwitterShare to FacebookShare to Pinterest
Labels: Eddie Murphy, neither mirth nor woe