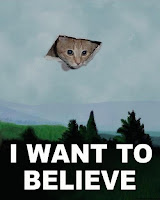 They came for us during the Shipping Forecast.

As the sombre woman on Radio Four warned us of gales in Viking, North Utsire, South Utsire, Cromarty, Forth, Faeroes and South-East Iceland, they came out of the skies to conquer a sleeping nation.

Five twenty-two in the morning. And I drive in the dark on the main road toward Bournemouth, over the hill above Tolpuddle and down to Bere Regis.

There, around the long sweep of the dual carriageway, they came through the drizzle.

Blue. White. Bright. Hanging above the road, sweeping from right-to-left as I drove toward it, right foot on the gas pedal despite knowing that I was driving relentlessly into danger.

And then, as my wipers thrummed across the not-quite-wet-enough-to-work windscreen, another.

Just like the first, blue, white, illuminated with a deathly glow, hovering with menace just above the road, sweeping slowly across my line of vision as I headed onward, ever onward toward them.

These visitors. These invaders, menace oozing from them as they hatched their plans against humanity, alien markings becoming clear on their hulls, their intention clear. They come not in peace. They come to dominate, destroy.

I tried to scream. To call out. To reach for the hands-free. But nothing. Nothing except:

"And now the forecast for the inshore waters of Great Britain and Ireland. A new low will…"

We are being invaded by brain-eating aliens disguised as Keep Left signs.

You have been warned.
Posted by Alistair Coleman at Friday, November 13, 2009