Neither Mirth nor Woe: How to get transferred in one easy lesson

Neither Mirth nor Woe: How to get transferred in one easy lesson 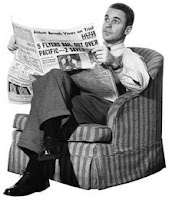 "Is that a newspaper you're reading?"

I looked up from my copy of the Daily Telegraph to see the angry, red face of the boss staring down at me.

"Yes. Yes it is," I replied, deciding it would not be wise to play silly buggers with a senior manager, especially a known spittle-flecked bully whose civil service career had stalled at the Ministry of Cow Counting.

And particularly not one whose immediate boss was his infinitely more popular wife. This being a humiliation he took out on all his underlings with a cost/benefit analysis on the Christmas Party; and a ban on leaving the building when the fire bell sounded, which everybody ignored.

"You KNOW how I feel about people reading newspapers on company time," he said, in a voice that could be heard all the way down in accounts, "I've said it before and I'll say it again: it's stealing from the company. It's theft. It's a disciplinary offence."

I turned the page and frowned at the unfunny cartoon, half amused at his description of an office full of civil service layabouts as "the company".

"Well? What have you got to say for yourself?" he boomed, fists clenching and unclenching with anger as – against all odds – I kept my nerve as those around me fell silent, fearing the worst, coveting my soon-to-be up-for-grabs stapler.

I folded the paper and filed it in the bin. Then, taking a glimpse at my watch, rose from my desk, walked the five yards to the keying-in machine and pushed my yellow plastic key home with a loud "Peep!"

I looked at the boss as if it was the first time I'd seen him, pretending to act cool whilst privately filling my pants.

"Back from lunch. Work to do."

He stormed away, barely able to contain his outrage: "Well... well... Just don't do it in work hours. Y'hear?"

Within a week, I was out of his department on a free transfer. Minor WIN.

... And working in the black hole of Accounts with all the other unemployable misfits. FAIL.

It was village idiot Peter (spoken with your tongue pressed firmly against your lower lip), dressed from head-to-toe in army combat fatigues, the only clothes he owned apart from his school uniform. He had left school three years previously.

"Don't worry," said Peter (spoken with your tongue pressed firmly against your lower lip), "I'll show you the ropes."

Email ThisBlogThis!Share to TwitterShare to FacebookShare to Pinterest
Labels: fail, neither mirth nor woe