On the Scaryduck Letters page

On the Scaryduck Letters page 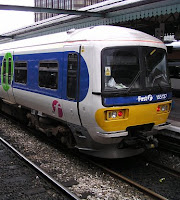 Another day, another couple of letters of complaint, yet another brush with the Grim Reaper, and something to stuff right up Rupert Murdoch's chuff if ever I get the chance.

It's got to be a) something to do with the weather and b) the fact that I'm turning to a miserable bastard with nothing better to do that insult the poor bastards in the complaints department.

Still you've got to laugh. Or kill them all TO DEATH with my trusty electric chainsaw, and bury them in various lime pits on the Isle of Portland. Hey-ho.

I had the misfortune of travelling on one of your trains yesterday, being one of those rare British days when the sun came out and temperatures reached a respectable 80 of the Queen's Fahrenheits.

By some unhappy coincidence, this was also the one day a year you switch on the heating in what passes for your rolling stock, with the predictable brain-melting results.

Although it was pleasing to see a number of female passengers forced into a partial state of undress as a result of the sweltering heat, I was rather less than impressed to find myself sitting diagonally opposite to an overweight, sweaty individual attired in much the same manner. For eg: Inappropriate lingeries.

Things took a turn for the worse as we sweltered past Didcot Parkway, whereupon this gentleman rose from his seat, towelled himself down with a rag on a stick, and began his round with the refreshments trolley.

And here is the nub of my complaint: The bag of Cheese and Onion McCoys he sold me was two days past its sell-by date.

Such Premier League Muppetry cannot be tolerated. Sort it out, you spazzers.

Here's a bit of free advice: Next time you feel the urge to light up a cigarette while you're driving, why not pull over to the side of the road, light up and then continue your journey?

That way, you may safely take both your hands off the steering wheel in relative safety instead of – say – trying to drive round a bend and down a steep hill whilst feeding your addiction, heedless of the fact that you have just mounted the curb and forced an innocent spectator to dive into a puke-filled hedge for his own safety.

Better still, if you really are such a fucking useless driver, why not stay at home, smoking to your heart's content, where the only person you are killing is yourself?

Please could you consider the following letter on a subject that is dominating the current news agenda for publication in your fine daily journal. I trust it is of the standard required:

I remain, naturally, your devoted servant