Here we go with another of our occasional series of 100 per cent of FACT facts*. This time, we're all about TV's favourite big boys club.

* May contain slight traces of lie 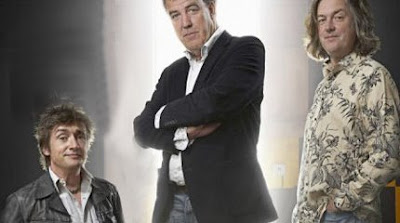 10. Some say The Stig is a number of established racing drivers taking part in the show anonymously. They're wrong. It's well-known hard man and brainbox Professor Stephen Hawking earning a few bob on the side

9. The result of his hideous jet car smash, Richard Hammond found himself split into 'good' and 'evil' versions of himself. Evil Hammond continues to host Top Gear, while his good self owns and operates the popular 'Compare the Meerkat' website

8. James May holds the world record for jumping over nuns in a steamroller – an impressive three-quarters of a nun, breaking Evel Knievel's long-standing record of half-a-nun set in 1973

7. Jeremy Clarkson's driving licence was obtained in the western Africa state of Sierra Leone, where the driving test consists of shouting the word "POWER!" at the top of one's voice.

5. Clarkson's infamous 'Kill a prostitute' lorry-driver gag which caused a furore in the press was simply a cover for the fact that he had thirty-seven dead prostitutes in the back of his lorry at the time of filming. One for every time a prostitute has asked him if Lewis Hamilton is The Stig

4. In the French version of Top Gear, the 'reasonably-priced car' is a Citroen 2CV, and the fastest lap time (four hours, twenty-seven minutes) is held by Charles Aznavour, who walked

3. Jeremy Clarkson's favourite Top Gear episode is the one where he drove a Bugatti Veyron up Jimmy Carr's arse, with hilarious results. Sadly, it has never been repeated, not even on Dave

2. James May has a life-sized Saturn V rocket in his back garden, made entirely out of beer mats (may actually be true)

Bonus FACT: Richard 'Hamster' Hammond gets his nickname not because of his diminutive appearance (he's 6' 5" – the camera angles just make him look smaller), but because he is incredibly good friends with Hollywood star and animal lover Richard Gere
Posted by Alistair Coleman at Monday, June 08, 2009