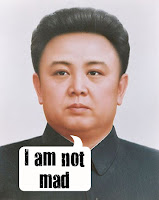 I repeat: Top Ten Kim FACTS that are 100 per cent of FACT.

Not just any old Kim – certain readers will be disappointed to learn – but this Kim: Jong-Il.

As usual, all my FACTS are totally guaranteed and will make you the life and soul of any party. As long as the other partygoers are particularly stupid, or are from Cornwall or something.

10. According to the Korean version of the Guinness Book of Records, Kim Jong-Il boasts the world's longest penis at a hefty three foot four. It was once ten feet long, but for a bizarre accident involving a rake and the girl next door

8. Kim passes the long, boring hours running the world's most successful military-first socialist state by writing letters to local newspapers on the south coast of England for shits and giggles

7. Kim Jong-Il scored all the goals in North Korea's 8-0 win over England in the 1966 World Cup final after effectively marking Nobby Stiles out of the game

6. Kim sprung to international fame as the writer of the acclaimed song "How much is that doggy in the window – I bet he tastes nice stir-fried with a side-order of Kimchi". However, Kim says his proudest achievement is his namecheck in the 12" version of the Chas'n'Dave song "Snooker Loopy"

5. Kim is persona-non-grata at the Axis of Evil Gentlemen's Club after giving Robert Mugabe a wedgie and trying it on with Ann Widdecombe

4. The recent North Korean Presidential Election (Kim Jong-Il vs Yes, I'm a fucking idiot, please nail my head to a coffee table) resulted in the state procurement of 37 Leksvik coffee tables from the Pyongyang branch of Ikea

3. Due to a shortage of hard currency, Kim has decreed that North Korea exists only in two dimensions, and should be folded up and kept in a drawer when not in use. Dear Leader Executive Order for Worker-Soldiers of the DPRK No. 37,046 concludes: "I am not mad"

1. Kim has ensured a tight strangle-hold over the North Korean media to ensure the loyalty of his people, and allows only two television channels: the staid Korean Workers' Party Central Television and Red Hot Naughty Over Forty

Email ThisBlogThis!Share to TwitterShare to FacebookShare to Pinterest
Labels: FACTS, I am not mad, Kim Jong-Il