On nearly getting killed TO DEATH

On nearly getting killed TO DEATH 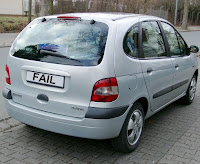 My followers on my Twitter and Facebook pages have been held rapt – I say RAPT – over my recent brush with actual DEATH after the brakes failed on my Renault Scenic, a vehicle known in our household as the Silver Hornet of DOOM.

So, what better way to fill you in on the actual 100 per cent truthful circumstances of my near fatal brush with actual DEATH than with a letter to the manufacturers outlining my grievances? An actual letter, in French, translated back into the actual English though the long-dead medium of "Ecoutez et Rrrrrepetez".

I am writing to you to point out a glaring design flaw in my Renault Scenic, a failing so grave I was nearly killed entirely TO DEATH yesterday in one of your cars.

To this end, I am prepared to overlook the fact that the rear left brake hose corroded to such an extent that it became completely detached from the rest of the braking system, leaving me travelling at 50 mph in a ton of metal and plastic with no actual means of arresting my speed except for a handy swarm of tramps which managed to slow my pell-mell descent to certain DOOM, their twisted, alcohol-reddened faces bouncing off my windscreen.

No. It was not this.

It was the fact that when my brakes failed, a big red light came up on my car's dashboard bearing the word "STOP".

Far be it for me to say that my car was thrown together by a bunch of belming, soap-dodging French crapauds, but I have one obvious question with this regard:

Were it not for the valiant sacrifice of some of Basingstoke's finest winos, instead of writing this, I would be upside down in an ornamental fountain outside Festival Place, drowning completely TO DEATH.

So, putting my unexpected survival to good use, I would suggest that instead of this useless "STOP" light, something more suitable for the circumstance should be nailed to the dashboard on future models. How about:

- "Your warranty has just expired"

or, a pictogram of some belming, soap-dodging French crapaud shrugging his shoulders and saying "Bouf" at my misfortune.

Sort it out, garlic-munchers, before I do something really stupid. Like buy a Honda.

Were it not for the fact that if I hang onto my Gallic death trap for another two years, it would be worth £2,000 under the (s)crappage scheme (a substantial mark-up on its current value, I can tell you for nothing), I would be loading it into a large cannon of my own design and firing it straight up your arse, brakes or no brakes.

Email ThisBlogThis!Share to TwitterShare to FacebookShare to Pinterest
Labels: getting killed to death, idiot letters, The Silver Hornet