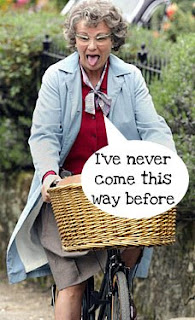 Lazy blogging day today, but EXCELLENT lazy blogging nonetheless. Even so, we address an important issue that cuts to the core of the society we live in ---

You know, despite all that poor, dead Mary Whitehouse says, there's not nearly enough smut on our screens these days.

In fact, thanks to those joyless curs at Ofcom, our so-called viewing pleasure is spoiled my stuff that is clearly not smutty at all.

What we need, then, is to take fine, upstanding and not-smutty-at-all films and televisions series and turn the mank factor up to eleven. Because that'll put the wind up the clergy and no mistake.

In fact, I've made a start already, and soon our television will be rocking up with top quality filth as poor, just-as-dead-as-Mary-Whitehouse Lord Reith intended when he said "Nation shall talk filth unto nation". I think.

- Return to River Frottage
- Feel or No Feel

- Whores Under the Hammer
- Gash in the Attic

And now it's your turn with further EXCELLENT points up for grabs. Shaving Ryan's Privates is automatically excluded from this list, and may result in total forfeiture of EXCELLENT points.

Also also: I've been asked to give this fine site - on a subject close to my heart - a bit of a plug. PLUGGED.
Posted by Alistair Coleman at Thursday, June 04, 2009