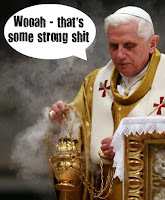 I repeat: Top Ten Pope Facts that are 100 per cent of FACT.

Use these entirely truthful facts at parties, in front of your boss and even at Sunday mass. You will soon be the talk of the town. Although – possibly – not for the right reasons.

9. His Holiness The Pope has an uncredited cameo role in hit movie Angels and Demons, playing a nunchuk-wielding nun in the final battle scene

8. The Pope, following a bit of messy business he'd rather not preach about, is to add a get-out clause to the Ten Commandments by adding the words "except greased-up nuns". He is also pressing for the text of the Sermon on the Mount to be altered to include the words "Blessed are the MILFs, for they are TEH HOTT!"

7. The second rule of Pope Club: You DO NOT talk about Pope Club

6. His Holiness may be forced to resign in shame, after 'flipping' his second home to claim £32bn in expenses for the Vatican

5. The Pope lives a double life as the world's most expensive assassin. He charges a million dollars a shot, but prefers the close-up work of despatching his marks with his powerful thighs

4. The Pope's vital statistics are 42D-24-36. He likes ponies, the smiles of happy children and world peace

3. His Holiness keeps the Popemobile in an underground Popecave, its location known only to his faithful manservant Alfred and his youthful ward Dick aka 'Altar Boy'

2. The Pope fills the long, boring days of being Pope by going down to the Vatican crypts and playing "Gottle of Geer" with his predecessors.

1. The Vatican boasts the world's biggest, most luxurious nightclub. Benedict's – "If you can't pull here, you're CELIBATE!"

Bonus fact: His Holiness's full title is Pope Benny Tied to a Tree XVI. There being no trees in the Vatican, he also goes by the name Pope Benedict on the Loose XVI
Posted by Alistair Coleman at Tuesday, June 16, 2009

Email ThisBlogThis!Share to TwitterShare to FacebookShare to Pinterest
Labels: FACTS, the pope