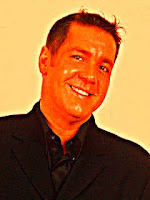 I'll never forget the words poor, dead, orange Dale Winton said to me as I bumped into him on London's Drury Lane not the other day.

A bright summer's morning, made all the brighter as I bounced off the fluorescent A-Lister outside the area's second cheapest hotel as he rushed from tanning salon to a nearby shop that had a special offer on gravy browning.

"Whoop!" he said, bouncing off me.

"Whoop!" – Words to cherish, take to your heart, mould to your entire way of living.

"Whoop!" – I said nothing. Lips sealed. Stunned into silence. Converting immediately from The Sacred Church of Geri "Out of the way, pleb!" Halliwell to the one true religion: The Temple of Winton.

For I knew that in the face of such a presence, anything I said would have spoiled the moment.

Such as: "Fucking hell, Winton, you're an orange bastard."

Or: "Never meet your heroes - you'll always be disappointed. Good thing you're not my hero".

I spent the rest of the day thinking of the fun I could be having on Supermarket Sweep. For eg: None at all.

The BBC has sold its Dale Winton-fronted National Lottery-based game show to Canadian TV. The format is to be adapted for Eskimo audiences, and will be named "Inuit to Win it"

Furthermore a version for Eskimo youth will also be made, called "Inuit to win it, innit"

Attempts to break into the Chinese TV market have proved somewhat problematic. Producers started recording a pilot episode of hit TV show Wheel of Fortune in 1997 not realising the complexity of the Mandarin language. Twelve years and 37,000 failed guesses down the line, the contestants are still trying to solve the first puzzle.
Posted by Alistair Coleman at Thursday, June 18, 2009