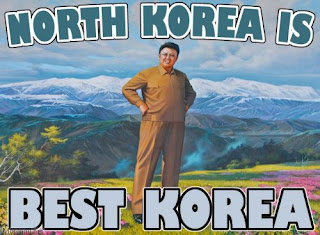 As the leader of the world's best military-first socialist Juche state where freedom of speech is one of our greatest treasures, it grieves me somewhat to hear that you have banned my Weymouth-based representative – the hard-working Comrade Albert O'Balsam – from commenting on your website.

This action – the result of Comrade O'Balsam offering some friendly advice regarding your fucking awful use of the English language – is just the kind of thing we in the Democratic Socialist Happy State of North Korea have come to expect from the puppet-government capitalist clique that if rife in the US-dominated traitor society of the West.

We demand that you re-instate Comrade O'Balsam – his heart bursting forth with patriotic fervour at the thought of the sun shining down on my good self from sacred Mt Paektu – as editor of your august journal, or I might find somewhere else to test my nuclear-tipped rockets for the peaceful exploration of space, if you catch my meaning.