Neither Mirth Nor Woe: Dangermouse

Neither Mirth Nor Woe: Dangermouse 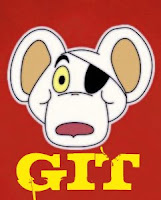 "So," she said, "What's your favourite TV programme?"

To be honest, I didn't really have one, but I was getting on like a house on fire with Debbie, and if cards were played right, there was every chance of red-hot hand-up-the-jumper action, with the further prospect of hand-up-her-jumper to follow.

"I'll tell you what I don't like, though" I said, for I am often very clear at what gets my goat.

"Dangermouse. What. A. Load. Of. Crap. No stories. Crap animation. Stupidest theme tune. I'd set the cat on the bastard."

She did not say goodbye.

There would be no hand-up-the-jumper. Not tonight. Not ever.

The next day at college, her best friend collared me in the sixth floor corridor.

"What have you done to Debbie, you twat? She LOVES Dangermouse."

"And don't try to apologise. She's never going to talk to you AGAIN."

She was as good as her word.

Debbie, it turned out, was also a member of the Bracknell College Fraggle Rock Fanclub.

Damn you, David Jason. Damn you to HELL.

You know who else has only one eye? Nick Griffin. Q E bloody D.
Posted by Alistair Coleman at Friday, October 30, 2009

Email ThisBlogThis!Share to TwitterShare to FacebookShare to Pinterest
Labels: dangermouse, neither mirth nor woe, Not having sex with a girl called Debbie