On harbouring an irrational hatred of Blackburn Rovers

On harbouring an irrational hatred of Blackburn Rovers 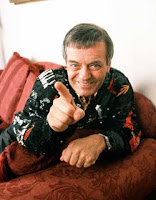 You see, it's like this. If my memory isn't playing me false, every Saturday morning of my youth, my parents would sit me in front of the radiogram with my brother and sister and tuned us into Hell itself: Tony Blackburn's Junior Choice on Wonderful Radio One.

They were well-meaning and full of good intentions, but didn't understand the torment to which we were exposed.

After the third or four hundredth listening of Nellie the Elephant, Puff the Magic Dragon and the very worst of the current pop chart, we would be sprawled on our backs, praying for the torture to end.

For it wasn't just the tunes. It was the host. Nine years of age is far too early to be wishing painful death on a fellow human being, but Tony Blackburn was marked with the Black Spot. A black spot he has somehow managed to survive for the following 35 years, despite my best efforts with a crowbar and a tin bath full of quicklime.

Happily, the dread of Saturday morning was well and truly balanced out on Sunday afternoons with The Big Match on ITV. Poor, dead Brian Moore presenting highlights of the top games of the weekend. And some pretty awful ones too.

"And our first match today is from Division Two," said Moore, "Let's go over to Ewood Park where Blackburn Rovers played host to Charlton Athletic yesterday."

Well, that certainly did it for me. Living in the South of England, I had never heard of Blackburn or Blackburn Rovers before that point, so it could only follow that they were owned by The Menace of Junior Choice, Tony Blackburn himself. There could be no other logical explanation, and hatred for all things Rovers filled my already blackened heart.

Sadly, neither Bobby nor Jack had turned out for Charlton, but any team that was owned by a couple of World Cup winners was good enough for me. They lost, and it was the fault of you-know-who.

Tony Blackburn: To the last, I will grapple with thee... from Hell's heart, I stab at thee! For hate's sake, I spit my last breath at thee! And your football team's RUBBISH.

Yes, I do know better now. Tony Blackburn has never owned Blackburn Rovers Football Club. Also, my memory WAS playing me false, for it was almost certainly Ed "Stewpot" Stewart who hosted Junior Choice at the time, meaning my entirely hate-filled future life was based on my inability to tell one annoying DJ from another, despite winning Radio One's Write-a-Funny-Limerick-About-Ed-"Stewpot"-Stewart competition.


If you've got this far, yes, I DO still remember the winning limerick, for which I never received my Ed "Stewpot" Stewart transistor radio, a grudge I hold to this day.

There was a young man called Stu
Who couldn't do any Kung Fu
He couldn't do Judo
And he was stuck up with Ludo
So he locked himself in the loo.
Posted by Alistair Coleman at Friday, October 23, 2009