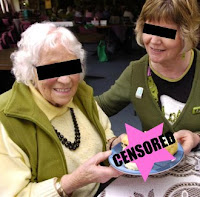 I was ten years old and should have known better, but I found myself in the cub scouts, and thrust out onto the mean streets of our village during half-term doing Scout Job Week.

It's something you don't get much these days thanks to all kinds of moral panics, but back in the day we thought nothing of knocking on a neighbour's door and asking if they wanted any odd jobs done. And if you got bummed to death by a paedo in the process, you just sucked it up, brushed yourself down, stuck a "Job Done!" in their window and put it down to experience.

So, finding myself able to walk without looking like John Wayne after a week in the saddle, I knocked on the door of number forty, the home of two very respectable elderly sisters, Edith and Mary, and gave them the whole Scout Job Week spiel, and despite Mary's finger hovering over the final nine of 999, they bought it.

A deal well and truly struck, I weeded their garden for an hour, and sweating profusely, I was invited in to accept my payment.

Despite it being the ungodly hour of two in the afternoon, both were lounging in their nightclothes. Tearing my eyes away from Mr Marks' and Mr Spencer's finest flannelette, I commented on an unusual arrangement of candles on the coffee table, next to a number of what can loosely be termed coffee table art books of a specialist nature.

They harrumphed, gave me my 5p (FIVE PENCE! For an hour's hard labour!), said how nice it was for a couple of lovely old sisters to trust young people in their home. Another harrumph, and I was propelled firmly into the street outside.

I asked my mum about Edith and Mary.

She looked at me with that 'You'll find out one day' look and said:

Email ThisBlogThis!Share to TwitterShare to FacebookShare to Pinterest
Labels: neither mirth nor woe, Sapphic Love