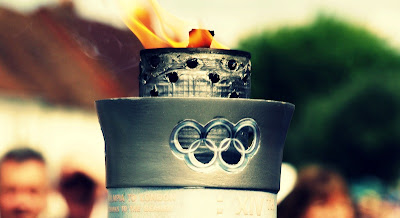 It's the Olympics! The world's greatest sporting event that's not the World Cup or ...err... The Commonwealth Games. But did you know...?

* Olympic officials have been left red-faced after the last-minute realisation that they've forgotten to build the British Bulldog arena. As a last-minute compromise, they'll be using the Centre Court at Wimbledon between matches

* Due to complex rules regarding sponsorship, the only bicycles allowed inside the Olympic Velodrome will be the cumbersome Barclays "Boris Bikes" hired out at venues and transport hubs across the capital. All competitors will require a valid Oyster Card

* The current Olympic champions in the ancient martial art of Ecky Thump is the People's Republic of Yorkshire, which has won the event at every games since its introduction in 1908 (except in 1984, when the gold was won by Lancashire after Yorkshire controversially boycotted the Los Angeles games)

* The smallest nation to enter the Olympics was the small roped-off Republic of Gesundheit, a country accidentally created during the post-war Versailles Conference when one of the delgates sneezed over the map of Europe. They entered the greyhound racing in the 1920 Antwerp games, coming last with Three-Legged Adolf. Gesundheit disappeared from the map the following year, after the invention of Tipp-ex

* Organisers have denied that the 2012 Olympic Games have been over-comercialised, bowing to the whims of the many sponsors. "It's nonsense," said LOCOG chairman Lord Sebastian Snickers

* English sporting hero Dan Prick remains the Olympic champion for Holding Your Breath Underwater The Longest, last held at the 1968 Mexico Games. It was also the last Olympic gold medal to be awarded posthumously

* Britain's dismal medal haul in the 1996 Atlanta Games is widely seen as a low point in the country's sporting history. The country's only gold was won by Princess Diana, romping home in the Mums and Dads race

* Nigeria has emerged as an early favourite to hold the 2020 Games, the IOC impressed by their bid which involves "126 MILLION UNITED STATES DOLLARS PLEASE SEND YOUR NAME ADDRESS ORGANIZATION BACK ACCOUNT NUMBER, YOUR NEW FRIEND GENERAL AARON A AARDVARK (RET'D)"

* Words advertisers are not allowed to use during the Games include "Olympics", "Gold", "Silver," "Bronze", "London 2012" and "Big fat hairy buttocks"

* A new crisis has hit the Olympic swimming centre as organisers admit there is no way of switching off the "All yellow band swimmers please leave the pool" announcement. This emergency comes on top of the G4S staff employed to stop towel-flicking in the changing rooms has failing to turn up. Anti-towel-flicking duties will now be carried out by Royal Marine Commandos

Let's hear it for the Olympics, everybody!
Posted by Alistair Coleman at Friday, July 27, 2012