A new record for driving the 18 miles into Reading for work: Ninety minutes thanks to Thames Water replacing a worn-out mains in the centre of town.

Now, I realise that I only have myself to blame for not paying the slightest bit of attention to the doom-laden signs left at the roadside for weeks in advance, and planning an alternative route to by-pass the town centre, but stuff that, I've got a better idea.

Time for a letter...

Congratulations on being the number one water and sewage company in the Thames Valley. I have used your fine services on my occasions, hardly ever encountering bizarre plumbing accidents, and with no side-effects whatsoever. A record of which you can indeed be proud.

The problem is this: Sitting in a traffic jam caused by your chaps replacing hundred-year-old water mains, it got me thinking that there REALLY must be a better way of doing the job. After all, you can't magic the pipes into the ground, nor can you summon up undead hordes of zombie and golem workers to get the work done in a fraction of the time. I imagine the unions AND the immigration people will have something to say about that, particularly as the undead tend to be a bit of a health and safety risk to the not-undead.

So, here's my idea, along with the picture that I pushed under the door of the Patent Office in the dead of night. In the words of respected London businessman Derek "Del-Boy" Trotter: "This time next year we'll be millionaires". 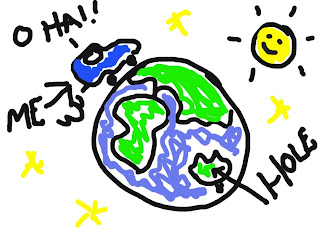 Instead of causing weeks of disruption by digging up major roads in the UK, simply move your entire road maintenance team to Australia, and dig UPWARDS. This approach is 100 per cent foolproof, and I've seen enough Hollywood blockbusters to know that despite crushing pressure and scorching heat, you can get from one side of the planet to the other in less than an hour and a half, morlocks and evil Kings of the Underworld permitting.

And here's the winning move: All the water that leaks through the pipes can simply flow downward through our Thames Water Access Tunnel, and can be sold to our parched Australian cousins at a substantial mark-up. I expect the project to pay for itself within a matter of weeks. Win-win.

The only problem I can see with this is the obvious Health and Safety issue. Australia - as you well know - is riddled with nasty things that live under toilet seats, and it only takes a moment's carelessness for one of your chaps to lift the lid on your tunnel and find himself killed completely TO DEATH, an embarrassing bite mark on his bottom which will be upsetting for his nearest and dearest.

To this end, I propose a diligent procedure involving rim-blocks, Domestos, and a big brush on a stick, and the safety of this multi-trillion pound project is assured. I am certain that your shareholders and customers will agree that this extra expense will be well worth the effort.

To demonstrate my confidence in this plan, I am willing to invest cash sums of up to 10 (TEN) pounds in its research and development, a substantial sum given the current economic climate. Please get back to me soonest, because those Johnnies from Southern Water have been sniffing around with a couple of fivers and a garden spade, and might get in before you.