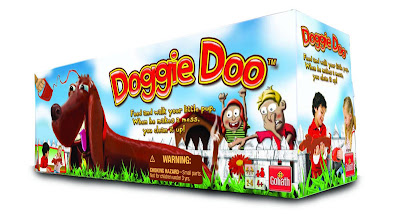 To the house of Tartarus that is Tesco in Aldershot, where we spot a copy of the so-called family board game that is Doggie Doo. Mind. Blown.

It's a thing. It's an actual thing. And actual thing where a dog does a big poo and your pre-school offspring have to shovel it up with a tiny plastic shovel. As if there wasn't enough wrongness in this world as it is.

What next? Alien Facehuggers, a fun game for kids aged three-and-up? Uh-oh, spaghetti-o! You've found a crashed alien ship on a distant planet. Who's going to be the first to have their chest ripped open by the carnivorous beast gestating inside them? No winners, ever

Dodging Traffic - Get your player across all eight lanes of the M25 on a foggy night in October without seeing your intestines ripped from your very body by a blameless and terrified Eddie Stobart driver. Fun for all the family.

Let Sleeping Dogs Lie (age six upwards) - Tosspot the Rottweiler is having a well-deserved nap after a tough morning ripping the heads off rabbits. Take turns poking him with a stick until he wakes up in a frenzied blood-lust

Katholic Kapers - Can your player make it from his boarding school dormitory to the kitchens for a midnight feast without disturbing Father Roger Boyes? A fun family board game with HILARIOUS forfeits

Bankers - Fiddle the interest rates, turf families out on the streets and call in the loans for small companies to earn ever bigger bonuses, while adding former MPs to your board to keep the law off your back. But watch out for the big bad policeman!

If there's cash money in this, I'm going to pitch my Whack-a-Tory game. Real hammers. Real Tories. The kiddiewinks will love it. This time next year, Rodders...
Posted by Alistair Coleman at Tuesday, July 03, 2012