From the Cunning Plans Department: How to attract women 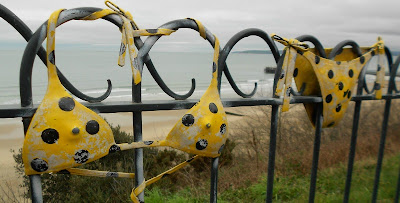 One from a B3TA Question of the Week called 'Cunning Plans'. "Ever come up with a cunning plan for something?" B3TA asked, "Did it work? What went wrong? Do you look back through the filter of the years with a burning sense of shame?"

I may have told this story before, but it bears repeating for its sheer self-confessional awfulness.

How to attract women

It started down the swimming pool. As I pootled around the shallow end, I clapped eyes on her for the first time - a vision of older blonde loveliness in a tiny yellow bikini - and I was in love. Over the following weeks, my passion for mature blondes in postage-stamp bikinis grew, and I decided that I must - somehow - have one of my own. Acutely aware of my own immaturity, I knew from the outset that actually speaking to one of these angels was out of the question, so I opted for another, more drastic cunning plan.

My cunning plan was cunning in the extreme: I would sit on bike bike at the top of the hill on our 70s concrete housing estate until a blonde goddess appeared. Then, I would swoop down, gather her up, take her behind the communal bins and force her to wear a yellow postage stamp bikini while I strutted up and down. Foolproof, I am sure you will agree.

It was as I swooped down the hill on a trial run (the target being an unfortunate cat which had sidled out of a hedge), that I realised I was doomed to failure, mainly due to a number of factors which are now utterly obvious:

1. The target is unwilling to be scooped up and will run away, causing you to fall off your bike and end up covered in blood, snot and sick

2. My bike had three wheels

I look back through the filter of the years with a burning sense of shame
Posted by Alistair Coleman at Thursday, July 19, 2012

Email ThisBlogThis!Share to TwitterShare to FacebookShare to Pinterest
Labels: mirth, owning up to doing something rather creepy, woe