The fearful danger that hangs from every rear-view mirror 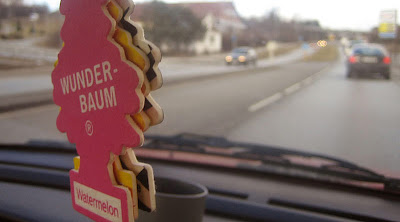 "Here in my car," sang eighties superstar Gary Numan, "I feel safest of all." I put it to you that he is lying through his teeth.

Driving a car these days is a dangerous business. Not only everybody who uses a car these days is a nutter - look up from the iPad that's perched on your lap as you read this on the commute to work and look at those weirdos with a death-wish - but the cars themselves do their best to fall apart around our ears.

"I have absolutely no sympathy," said Jane as she drove her car back from the garage, "for anybody who fails their MoT test because of a failed light bulb."

I heartily agree, and within a week, my car has failed its MoT because the bulb that illuminates the rear number plate isn't working. Yeah, I'm a dope, and I have already punched myself in the face for this act of brazen stupidity.

Having suffered a similar fate, my Twitter pal Steven (and well worth the follow if you are that way inclined) asks the question that absolutely needs asking: "I wonder how many people every year are killed due to non-functioning number-plate bulbs". I believe the answer to be somewhere in the region of the square root of zero.

Granted, they are handy for those times when you've been run over at three o'clock in the morning, but frankly you ought to be in bed at that time, not lying down in the middle of the road with tyre marks up and down your back. Unless you are - oh-ho! - a sleeping policeman.

However, it must be said that the MoT test remains important in that it prevents any number of unnecessary road deaths through a careful check of vehicle components.

For example, you might be interested to hear that before a tightening of standards three years ago, an average of thirty-seven back seat passengers were killed entirely to death by car cigarette lighters with faulty springs. Now, this number is more than halved, thanks to an ingenious fix by some bright spark at the Transport Research Laboratory in Berkshire that involves wedging a slither of cardboard down the side of the lighter so that it doesn't rattle about so much. What will these boffins think of next?

Our guard against mobile death traps must not and will not drop. Let's not forget the huge cover-up after the air freshener poisonings caused by rogue dangly air fresheners that don't look like trees, which only came to light after cars failed the strict emissions test even before the equipment had been switched on. Now, dangly air freshener checks are ruthlessly efficient, with only top quality dangly air fresheners that look quite-a-lot-like-a-tree being permitted. Yes, it's an extra 79p extra expense - a daunting sum in these cash-strapped days for Britain's already harassed motorists - but well worth the peace of mind of not getting killed entirely to death by dangly air fresheners made out of razor blades, typhoid and the souls of the damned.

Email ThisBlogThis!Share to TwitterShare to FacebookShare to Pinterest
Labels: cars, getting killed to death