God-botherers and the case for elephants 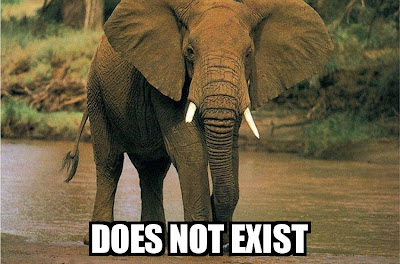 To Weymouth to take in the Olympic sailing, where rising fervour for the Games is matched only by the religious nuttery of the kind that you only get in towns at the far end of the railway line out of London. They fall asleep on the train, wake up as it shudders to a halt and - Lord be praised! - a new town ready to receive God's Healing, whether it wants it or not.

Firstly comes the news that the town's local Islamic convert (the subject of a TV documentary and a subsequent poorly-attended march by bussed-in EDL knuckle-draggers) has had his collarless dish-dasha felt by the Old Bill over terror plot allegations, which comes as little surprise. The town exports lunacy like Melton Mowbray exports pies and Liechtenstein does false teeth. I should know - I lived there for ten years, and I'm on pills for me nerves, you know.

The town heaved with preachers, healers, roving Jehovah's Witnesses, all hoping to save a few souls amongst the sock-and-sandal wearing visitors down for a bit of a seaside holiday and the chance to watch beach volleyball on a thirty-foot screen.

On the harbourside, a furtive-looking chap heaved his display of religious tracts out of a suitcase like Del-Boy trying to shift hooky after-shave down Peckham market and launched into what I can only describe as the worst argument for the proof of God that I had ever heard. Turns out he was a creationist, with a particular dislike for a) reason and b) atheists. As a deity-curious atheist with a particular disdain for young-earthers, my ears pricked up in a way that millions of years of evolution had conditioned out of my body.

His argument essentially revolved around the fact that evolution is "only a theory without evidence", therefore God. All through the medium of elephants, for which he appeared to hold in particular disdain.

"I could say that elephants don't exist, and you would need faith to believe me," he said, clearly off his rocker. "It's the same with these atheists and God. They say he doesn't exist, when there is evidence everywhere. THERE ARE NO ELEPHANTS."

Bit of an elephant-sized hole in your reasoning, old chap, on account of all the elephants. I felt tempted to show him the evidence for gravity (which is also 'only a theory') by pushing him over the harbour wall, but a couple of burly coppers hoving into view told me this would be a bad thing.

Instead, I joined a small crowd which was openly booing at a G4S security van, and felt much better for it.

And then, parched from an afternoon in the sun, comes the welcome sight of a balding chap handing out free bottles of water. And, yes, there's a catch. Your water comes with a free bible, a book I've already read thank you very much, and I thought the author - to quote Dawkins - was "jealous and proud of it; a petty, unjust, unforgiving control-freak; a vindictive, bloodthirsty ethnic cleanser; a misogynistic, homophobic, racist, infanticidal, genocidal, filicidal, pestilential, megalomaniacal, sadomasochistic, capriciously malevolent bully". Worse than Jeffrey Archer, even.

So, my thirst quenched, this leaves me with a problem. Anyone got a use for 200 bibles and a semi-conscious Gideon?
Posted by Alistair Coleman at Wednesday, August 08, 2012